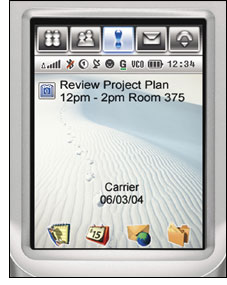 Qtopia is an embedded Linux platform designed by Trolltech and has just today been selected by 50 major vendors for use in their newest portable devices. The amount of interest Qtopia has gotten these last few weeks is a good indicator that Linux embedded platforms will be the core platform in future devices.

A fully customizable development environment will give device manufacturers complete freedom and control over their products, a new possibility to create and market their own branded user interface without the restrictions of current proprietary software platforms like Windows Mobile and Symbian OS.

Current manufacturers utilizing the potential of Qtopia are;

Philips will be using Qtopia in their Nexperia Cellular System Solution 9000 platform for optimized mobile applications for use in smartphones and high-end feature phones.

Ningbo Bird, the largest domestic supplier of mobile phones in China, has selected Trolltech’s Qtopia as the software platform for all its Linux-based mobile phones.

Leadtek has chosen Qtopia as the standard software platform for its next phase of Linux-based IP videophones and other devices.

Motorola has chosen Trolltech’s Qt/Embedded Linux development platform as the foundation for its E680 and A780 mobile phones.

Enteos, a leading Italian developer of mobile phone technologies and mobile phones manufacturer, is developing two Linux-based smartphone platforms with Qtopia Phone Edition and Qt Embedded on the Freescale and STMicroelectronics application processors. Enteos’ i-GO900, the first product based on these platforms, will be available on the market in Q4, 2005.