Panasonic has announced their new 2005 line-up of handset phones. 8 new phones are included in the lineup with everything from changeable faceplates to higher resolution digital cameras.

The Visual Slim series – VS7 and VS3

The VS7 will feature a 2.5″ TFT display (16 million colors). Also featured will be a 2.0 megapixel camera with the ability to take 15-frame continuous shots. The VS3 features everything that the VS7 does except scaled down; 1.3-megapixel camera and 2.2-inch high-resolution LCD.

The MX7 features a 2.5″ TFT (16-million colors) and a 2.0 megapixel camera with a 15-frame continuous shot ability. The MX6 features everything that the MX7 does except scaled down; 1.3-megapixel camera, a 2.2″ TFT and features messaging illumination SMS without compromising the battery life.

The SA series is aimed at outdoor enthusiasts featuring a “sporty” design. Basically the phones are the same as the MX7 but they have a different outer shell.

The SA7 is basically the same as the MX7; 2-megapixel camera, 2.5″ TFT and long battery life. The SA6 has all the features of the MX6 but with a sporty finish.

The sleek SC series are minimalist style candy bar design phones aimed at consumers that don’t want to shell out the big bucks. 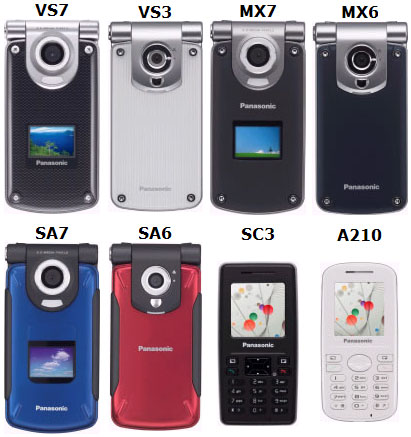