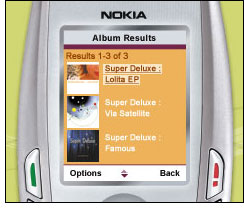 At the 3GSM World Congress today Nokia has announced an agreement with Microsoft to allow support for various media protocols to be purchased and transferred to your mobile device and later shared with your home XP PC.

Users simply browse the music store from their mobile device or PC and listen to music samples before choosing which tracks to purchase. When selected, downloaded songs will appear directly on their mobile phone (or PC), with the payment appearing on their monthly phone bill. The songs are always saved in a virtual “locker” service that ensures your purchased songs can be downloaded any time you like.

The new service is available immediately; mobile operators can provide their customers access to download music using the mobile music solution from Nokia and Loudeye with MTP supported handsets.

Consumers can also browse the music store from their mobile device or PC and listen to music samples before choosing which tracks to purchase. A locker service preserves the users’ library of music, ensuring users can download the songs they own at any time. Loudeye and Nokia have built the platform on open standards, and the content delivered to mobile devices is protected using the OMA v1.0 DRM and future releases will also support the OMA v2.0 DRM.