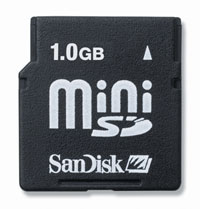 The SanDisk miniSD card includes an adapter allowing it to be used in any of the existing SD card devices.

The new 1GB SanDisk miniSD card is expected to be available at the suggested retail price of $99.99 in Q2 2005.

SanDisk Corporation today announced that it is doubling the current capacity of its popular SanDisk miniSD card to 1-gigabyte (GB). The miniSD card is used in a growing number of mobile phones with multimedia capabilities such as digital cameras, music players, video recording and playback, games and more.

“The 1GB miniSD card provides a level of storage that significantly enhances the features and usability of these full-featured mobile phones,” said Nelson Chan, executive vice president and general manager of SanDisk’s consumer and handset business. “For example, with a 1GB card you can store approximately 16 hours of MP3 songs, record up to several hours of MPEG-4 video or take more than 2000 digital photos on a 1-megapixel mobile phone. With that level of capability, consolidating music, video, digital camera and other key features into the mobile phone platform is much more meaningful and powerful.”

According to IDC, the global market for mobile phones with card slots is expected to increase to more than 258 million units by 2006, as manufacturers continue to add features to phones that increase their storage requirements. In addition to increasing available memory, a removable storage card provides greater interoperability with other portable consumer electronics devices, an important feature as mobile phones converge with other portable devices.

This is the latest in a series of new capacity points offered by SanDisk. Also announced was the 512MB SanDisk TransFlash(TM), one of the smallest flash memory storage cards designed primarily for the mobile phone market.

Offered for sale to OEM customers and through retail markets, SanDisk cards are sold at many of the 100,000 consumer electronics stores and other retail outlets where SanDisk products are sold worldwide.