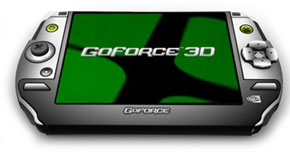 Nvidia announced their new version of the Nvidia GoForce chip, The GoForce 3D 4800. Nvidia first announced the GoForce 4500 back in September of 2004.

In addition, it also includes a hardware MPEG-4 decoder capable of VGA resolution video, such as television programs or movies stored on an SD card, at rates up to 30 fps. If thats not enough for you, the chip will even allow for real-time, full-duplex, two-way videoconferencing at CIF (352 x 288) resolution at 30 fps.

Phones are becoming feature packed these days. I wouldn’t be surprised if we eventually have full blown portable video player phones. Imagine the Archos PMA400 with a built in phone!

“The need to preserve talktime and the desire for immersive multimedia capabilities has always created a conflict for cellphone manufacturers,” said J. Gerry Purdy Ph.D, principal analyst for Mobiletrax. “The NVIDIA approach to this problem is comprehensive and innovative. GoForce wireless media processors innovate by giving OEMs new ways to manage multimedia content through technologies like FotoPack while closely managing battery life with NVIDIA nPower technology.”

The GoForce 3D 4800 media processor enables players to enjoy one of the most intense gaming experiences delivered on a mobile device by boosting 3D performance by 40% over the previous generation of mobile processors. GoForce 3D 4800 WMP’s ground-breaking pixel-shader architecture with support for up to six simultaneous textures enables the GoForce 3D 4800 WMP to deliver spectacular image quality for 3D applications.

An embedded hardware MPEG-4 codec allows OEMs using the GoForce 3D 4800 WMP to add high-quality camcorder-like video capability never before available in a wireless handset. The high-powered codec captures VGA resolution MPEG-4 video at up to 30 frames per second (fps). Moreover, it allows users to playback VGA resolution video, such as television programs or movies stored on an SD card, at rates up to 30 fps, turning their mobile phone into a convenient video entertainment device. The new media processor even supports real-time, full-duplex, two-way video conferencing at CIF (352 x 288) resolution at 30 fps.

Phones based on the NVIDIA GoForce 3D 4800 WMP are expected to be released by the end of 2005.