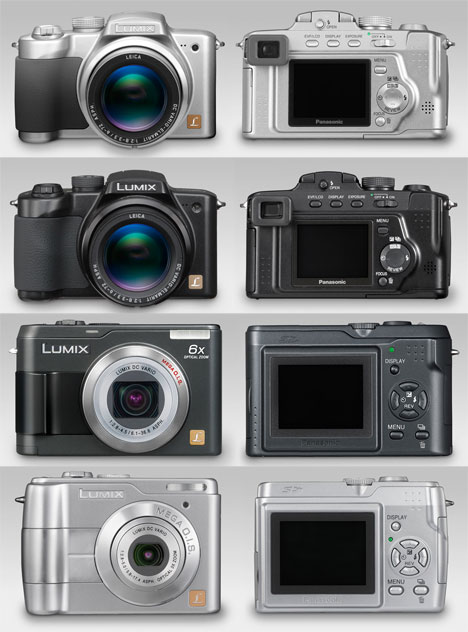 Panasonic today has unveiled five new digital cameras under the Lumix line-up. Starting with the Panasonic Lumix DMC-FZ4 and Lumix DMC-FZ5 cameras, the DMC-FZ4 has four megapixels and a 1.5-inch LCD display, while the DMC-FZ5 has a 5 megapixel sensor and 1.8-inch display.

The new Panasonic LZ series are in a slightly lower class than the DMC’s, but still pack four megapixels with the Lumix LZ1 (silver body) and five megapixels with the Lumix LZ2 (black body) and maintain most of the same features with just a slightly cheaper lens and smaller body; a Lumix 6x zoom, 37 – 222 mm equivalent with F2.8 to F4.5 apertures.

Finally the Panasonic Lumix DMC-LS1 digital camera, it is one of the first entry-level digitals from Panasonic with OIS (Optical Image Stabilization). The lens is a Lumix 3x zoom with a 35 – 105 mm equivalence and aperture of F2.8 – F5.0. It offers a huge 2.0-inch TFT LCD display.

All these new digitals use the Panasonic Venus II imaging sensor with Panasonic ‘MEGA OIS’ image stabilization for super crisp and sharp images. They also offer an HDTV resolution setting, 1920 x 1080 as well as 320 x 240, 30 / 10 fps video. ISO sensitivity on the four megapixel cameras is 64 to 400 and 80 to 400 on the five megapixel ones. The LZ1, LZ2 and DMC-LS1 come with 14MB internal memory, all cameras use the SD/MMC card format, but unfortantely they all still rely on the old USB1.1 protocol. We can expect prices and an actual release date next week during the Photo Marketing Association (PMA) conference.