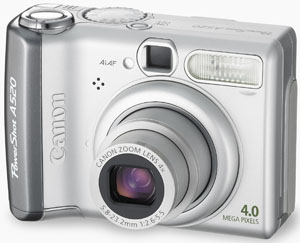 Canon has announced their new model in the A series camera line. The A520 will include 4x Optical zoom, 4 megapixels, and a 1.8-inch LCD screen. Not to mention that it is also lighter than the A85 model by around 10%. The line also includes the A510 which has a few a 3.2 megapixel CCD which will replace their popular A75.

Overall this camera doesn’t seem to upgrade the line that much. Seems like every little advancement they make to the line they put out a new model, usually by adding another 5 to the name, but this time they jumped all the way from 85 to 510!

The camera should hit the stores in March for around $300 US.

Canon’s new PowerShot(R) A520 compact digital camera combines the sought after simplicity of a family-focused camera, a phenomenally faithful four megapixel image sensor and a powerful 4x optical zoom to produce pictures that all can be proud of with the image quality Canon is renowned for. The camera will be in stores this March for an estimated street price of $299.99*.

Named for their use of AA batteries, Canon’s A-series digital cameras offer comfortably placed controls and feature high image quality in order for consumers to capture, save and share images of meaningful memories, personal milestones and family functions.

“We created the A520 model to give consumers an enhanced level of image quality and resolution without sacrificing the flexibility, freedom and fun that digital photography can be,” explained Yukiaki Hashimoto, senior vice president and general manager of the consumer imaging group at Canon U.S.A., Inc, a subsidiary of Canon, Inc. (NYSE:CAJ). “The PowerShot A520 digital camera continues Canon’s long-standing tradition of providing consumers with imaging excellence in an affordable and uncomplicated package.”

Like its little brother, the PowerShot A510 digital camera, the new PowerShot A520 model also is 13 percent smaller and 10 percent lighter than previous models, and is also equipped with a longer 4.0x 35-140mm (35mm format equivalent) optical zoom lens with Canon optics for sharp images. The new lens features all-glass construction and two aspherical elements in a seven-element formula.

The PowerShot A520 digital camera requires only two AA batteries, while providing the same number of shots (300 with LCD screen on) as previous models that used four batteries, thanks to reductions in power consumption made possible by improvements in key components and circuit design.

The PowerShot A520 digital camera is equipped with a nine-point AiAF “Smart” autofocus system and 13 shooting modes. The standard shooting modes are Full Auto, Program, Manual, Shutter-priority, and Aperture-priority with additional modes including Portrait, Landscape, Night Scene, Fast Shutter, Slow Shutter, Special Scene, Stitch Assist and Movie. The Special Scene modes, which helps make it easy for beginners to achieve optimum results in many popular photo opportunities, has been enhanced with the addition of two new settings called Night Snapshot and Kids & Pets. The PowerShot A520 digital camera is also capable of recording movies with sound for up to three minutes per clip, making it perfect for capturing memories in motion.

The new camera’s grip is ergonomically improved, and the control layout is even easier to use than before. Other camera functions including self-timer and review have also been enhanced for greater creative flexibility from previous models

Image quality is enhanced and improved as a result of Canon’s proprietary DIGIC (Digital Imaging Integrated Circuit) image processor. DIGIC combines the roles of image processing and camera function control into one chip, resulting in faster display and write times for each image and lower power consumption, which extends battery life. Moreover, because DIGIC technology was designed specifically for use in digital cameras it is also capable of handling JPEG compression and expansion; memory card control; LCD/Video control and processing gain control (control of CCD signal amplification); Auto Exposure; Auto Focus; Auto White Balance control and most other functions.

In addition to its rich feature set, the PowerShot A520 digital camera is compatible with a wide variety of optional accessories including supplementary wide-angle (WC-DC52), telephoto (TC-DC52A) and close-up lenses (52mm Close-up Lens 250D). These accessories enhance the new camera’s versatility and make it easier to use in specialized applications such as real estate and insurance photography. An underwater housing, WP-DC60, is also available and can be used at depths up to 130 feet. The combination of the A520 digital camera with the WP-DC60 housing unit is great for family vacations at the beach, while skiing, or simply to help protect the camera from the elements.

Canon was able to improve the performance of the A520 digital camera’s built-in flash relative to its predecessor – the PowerShot A85 digital camera, with a maximum distance range of approximately 11 feet at ISO 100. To further enhance the built-in flash of the A520 digital camera, Canon has developed a new optional accessory called the High Power Flash HF-DC1. The flash is a supplementary unit that operates wirelessly and increases the effective flash range up to approximately 30 feet. The HF-DC1 flash is supplied with a mounting bracket so it can be attached to the camera, but it can also be hand-held or mounted on a tripod or accessory light stand to adjust the lighting angle for pro-like quality results. Multiple HF-DC1 units can be synchronized with a single camera for even greater lighting flexibility. This smart high powered slave flash unit is compact and compatible with almost every PowerShot digital camera.