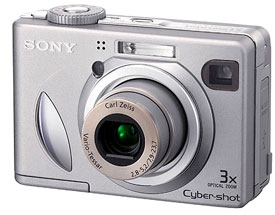 An updated version of the Sony DCS-W1 has been spotted on Sony’s SonyStyle shopping site; the DSC-W5. The camera is no longer on the site, it has been quickly removed, but that doesn’t mean the camera isn’t coming. The new camera packs a 5.1 megapixel sensor, 3x optical zoom, 2x optical zoom, and a 2.5″ LCD screen. Also featured is a burst capture mode capable of capturing 9 frames with a rate of 1.6 frames per second. In addition, a movie mode will capture at 640×480 for a duration determined by the size of media card you are using.

The DSC-W5 was available for pre-order on Sony’s SonyStyle website for $350 but has recently been removed. Someone made a booboo! When the site was up, the ship date was listed as February.