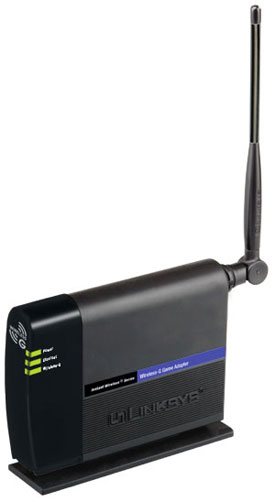 Linksys announced their new videogame console wireless solution today which is capable of bringing wireless to the PS2, XBOX, and GameCube. The Linksys Wireless A/G Game Adapter (WGA54AG) will connect to 802.1a, b and g networks.

The Wireless A/G Game Adapter can also connect your Media Center Extender-enabled Xbox to a Windows Media Center PC allowing you to stream media to your XBOX.

One less wire you need to run through the house sounds great to me.

The Wireless A/G Game Adapter (WGA54AG) is immediately available through authorized retail, E-commerce and distribution channels at an estimated street price of $129.

Compatible with 802.11a, b and g compliant devices, the Wireless A/G Game Adapter works with network ready game consoles, including PlayStation2, Xbox, and GameCube. The game adapter enables game consoles to connect to a network and play online games without running wires through the house. The Wireless A/G Game Adapter is also designed for Microsoft Windows Media Center Edition so users can wirelessly connect a Media Center Extender-enabled Xbox to a Windows Media Center PC. Now users can enjoy digital entertainment throughout the home.

“Linksys continues to expand its line of wireless entertainment devices to provide more value from a home network,” said Tim Thornton, Linksys director of product marketing. “The A/G game adapter compliments the Linksys line of A/G routers, network cards and Media Center Extender while also providing the technology to work with existing network infrastructures installed today. Gamers will appreciate the ease of use and performance quality that will give them a real-time play environment.”

In most homes, the Internet connection is not in the same room as the game console. For example, the game console may be in the bedroom or family room while the Cable or DSL Internet connection is located in the downstairs study. Game enthusiasts who want to access live gaming sites such as Xbox™ Live* or play direct head-to-head Internet games face the difficult task of running Ethernet cables. The Wireless A/G Game Adapters solve this problem by enabling connectivity from the game room to the broadband connection without stringing wires.

The Wireless A/G Game Adapter can transmit data using either Wireless-A (802.11a), or Wireless-G (802.11g) or Wireless-B (802.11b). Because of its resistance to interference and its high data rate, Wireless-A can be ideal for applications that demand a consistent signal and high network throughput. The Game Adapter can add wireless capabilities to devices such as a Media Center Extender-enabled Xbox, without worrying about interference or dropped video frames.

Pricing and Availability
The Wireless A/G Game Adapter (WGA54AG) is immediately available through authorized retail, E-commerce and distribution channels at an estimated street price of $129.