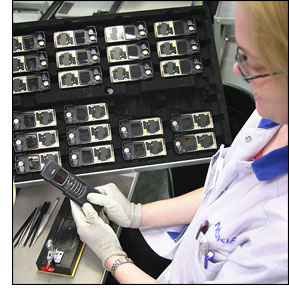 The handsets based on TI’s Digital RF Processor (DRP) will be smaller, faster and offer more features at a lower price because of the integration of the digital baseband, SRAM, logic, RF, power management and analog functions.

Today’s announcement fulfills a commitment TI made in 2002 when the company announced its intention to integrate the bulk of handset electronics on a single chip, including digital baseband, SRAM, logic, RF, power management and analog functions, and to sample the first product in 2004. The first version of the single-chip solution, which sampled in December 2004 and was developed through TI’s advanced 90nm CMOS manufacturing technology, targets the mass-market voice-centric marketplace.

By adopting TI’s DRP-based single-chip technology for its future mobile phones, Nokia intends to increase its proven innovation and leadership position in the marketplace. Cost, size, power and performance optimizations are crucial, especially for high-volume entry-level mobile phones. The combination of Nokia’s world-leading expertise in mobile devices with TI’s DRP based single-chip technology will take this optimization to a higher level. As a first step, Nokia phones based on the single-chip solution will target the entry-level mobile phone market, particularly in high-growth regions such as India and China.

“Over two years ago, TI announced its vision to integrate its DRP technology in our mobile system solutions,” said Gilles Delfassy, Senior Vice President, General Manager, Wireless Terminals Business Unit. “This vision was first put into action in a single-chip solution for Bluetooth connectivity, is now continued with the single-chip GPRS solution, and will be followed with a robust roadmap of single-chip products to address additional wireless needs. With the industry’s first integrated single-chip solution, TI and Nokia are bringing more affordable, advanced mobile phones to consumers worldwide.”