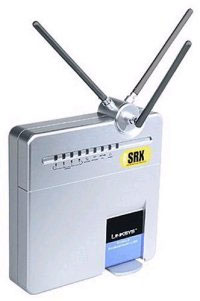 Earlier this month Linksys announced two wireless products that claim to offer an increased speed and range over current 802.11g devices, they are now available to purchase from Amazon.com. Both the WRT54GX Wireless-G router and the WPC54GC Wireless-G PC Card use Linksys’ SRX (Speed and Range eXpansion) technology to offer up to 3 times the distance and 8 times the throughput.

SRX is based on MIMO (Multiple In, Multiple Out) technology, a key component in the upcoming Wireless-N (802.11n) standard. MIMO uses multiple radios and antennas (3) on a wireless router or client adapter for improved performance in range and speed. The Linksys Wireless-G Router with SRX and Wireless-G PC Card with SRX use this smart radio and antenna technology along with standards-based Wireless-G (802.11g) networking to provide users with faster networking throughput and a further reach of their wireless networking signal.

Users will benefit from the following features in the Linksys SRX Products:

Wireless network range can reach up to 3 times farther and wireless network performance can be enhanced by up to 8 times compared to the throughput of standard 802.11g technology when using all SRX products

Designed for interoperability and enhanced performance with all standards-compliant 802.11g and 802.11b products

All in one device: Internet sharing router, 4-port 10/100 switch, and an SRX-enhanced Wireless-G access point

Users can experience up to a 3 time improvement in their wireless network range when using only Linksys SRX routers and client adapters compared to when using standard Wireless-G devices. With the range and coverage improvements, SRX devices also help to eliminate “dead spots”, enabling users to receive the wireless signal in more places around the house or office. Multiple antennas transmit and receive multiple data streams using the same frequency at the same time, increasing the range and coverage. SRX users could also witness up to an 8 time improvement in the throughput of their wireless network when compared to using standard Wireless-G products.

“A common complaint about wireless networking in the home is that customers can’t get the wireless signal to reach certain rooms or areas around their home,” said Tim Thornton, Linksys director of product marketing. “Our SRX products help extend the range of a wireless network so customers can access their network as well as the Internet from more areas in their home. The enhanced speed can also provide customers with a faster network providing a better networking experience.”

The Linksys SRX devices are Wi-Fi certified and backward compatible with 802.11b (Wireless-B), 802.11g (Wireless-G) and other Linksys SRX products. Mixed wireless environments such as networks containing SRX, Wireless-B and Wireless-G products can operate each client at its own maximum data rate. SRX products maintain their higher speed and range providing the throughput and quality of service to deliver applications such as VoIP and video streaming.

Security To enhance both data protection and privacy, the SRX Router can encode all wireless transmissions with WPA (Wireless Protection Access). It has a powerful Stateful Packet Inspection (SPI) firewall to enhance protection to all the wired and wireless PCs against intruders and most known Internet attacks while also supporting VPN pass through. Configuration can be done simply with the use of the web browser-based configuration utility.