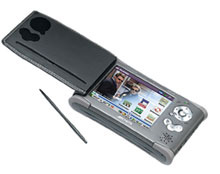 It has been some time now since Archos first showed us this bad boy at CeBIT in 2004. Well, now it is officially launched!

One of the biggest selling factors in my opinion is the Linux Qtopia operating system. Archos plans on releasing a Software Development Kit (SDK) so developers, and users, can create their own apps for use on the PMA400. The possibilities are endless, its the toy that keeps on getting better with time. I am sure there will be plenty of hacks eventually allowing you to play tons of different codec formats, but that’s just my speculation.

Another neat feature is the ability to plug devices such as a flash drive, digital camera, or even an external HDD directly into your PMA400 and it will load up on the PMA400 as a external HDD so you can copy pictures on to and off the device. This eliminates the need for extra SD/MMC/CF card readers. The devices will load up as a USB 1.1 interface; slow but definitely useable.

As for the user interface, the PMA400 has a 3.5″ touch screen and multiple buttons on the device for easy navigation. In addition you can input text through a virtual keyboard, handwriting recognition or even hook up an external USB keyboard.

The device will also feature a removable batter with the ability to purchase spares for backup.

The pricing isn’t available yet, and either is the release date. I for one am holding out for this device for sure.

The PMA400 is a whole wack of devices in one;

With the use of the docking station the PMA400 can control the tuner inside your VCR, cable box or satellite receiver to automatically adjust the channel and record based on the time and duration of the schedule. Store up to 120 hours* of TV programs/ video content in MPEG-4 SP format in the 30GB hard drive. Playback MPEG-4 SP videos with soundtrack in MP3 up to a resolution of 704X480, with 262,000 colors, at 30 frames per second.

The PMA400 has a built in WiFi detector which will inform you when you are in range of a WiFi connection. Woohoo!

The PMA400 has a built in version of the Opera web browser so you can surf the web. It also includes an e-mail client which supports POP3, IMAP4, and SMTP.

The PMA400 features built-in 802.11b WiFi to browse the Internet and access e-mails from any wireless hotspot.

In addition, a USB to Ethernet connector can be purchased to enable land line surfing for super fast speeds.

Record from any analog source into MP3 or WAV (PCM) format. Voice recording with built-in microphone.

Record your voice using the internal microphone. The PMA400 also features an audio recording application allowing you to record (encoding in real time) in MP3 and WAV, from almost all analog stereo sources.

View pictures and organize them on the PMA400. Supported picture formats are JPEG, PNG, GIF or BMP.

Store anything you want on the PMA400’s 30GB hard-drive through its USB 2.0 connection, or its WiFi connection. 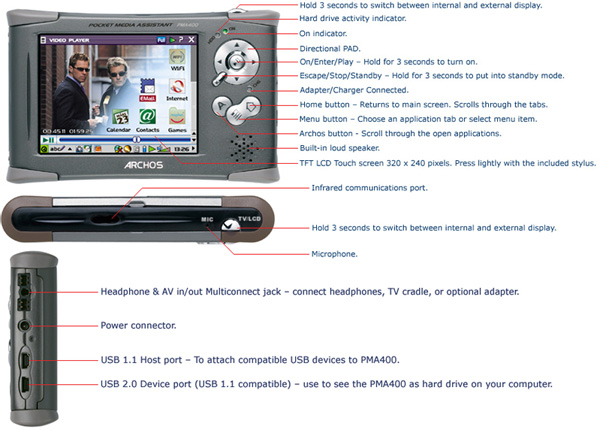 AV Connections: Earphone/Line Out jack. Built-in microphone and speaker. TV cradle to connect to TV with analog audio/video In & Out to RCA jacks, S-video In, and IR receiver for remote and IR emitter for tuner control, SCART In & Out for European version. Travel audio-video kit in option to record audio and video analog source on the move.

Battery life: Up to 4 hours* for video playback or 9.5 hours* for music. Removable battery available as an option.