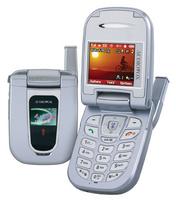 UTStarcom (formerly Audiovox, which sounds cooler) announced its new phone the CDM-180. I would have called it the “Stubby” as it looks oddly squashed with its landscape orientated 262K 1.2″ TFT screen.

The compact clamshell Tri-Mode (800/1900 MHz CDMA) handset is very lightweight and features a built-in CMOS 330k pixel camera with a flash that also acts as a lantern for video shooting. CDM-180 also features a retractable antenna, as well as audio and video recording. It has two-way SMS/MMS/MS capabilities and a built-in speakerphone.

UTStarcom didn’t announce when the phone will ship.