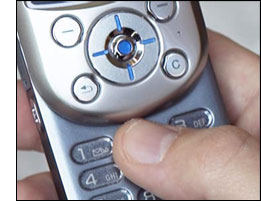 The benefit of having an analog joystick rather than a digital one is simple, with analog you can accurately maneuver through menus and options at variable speeds and unlimited directions, with digital you are limited to the preset navigation speed and usually only four directions. I just can’t wait to hit up some mobile Pac Man or Asteroids once this thing hits the streets.

Varatouch, the leading designer of innovative input devices for consumer products, introduced today the world’s smallest joystick. The design is based off of Vsense technology developed by Varatouch that enables the lowest cost, fully functional, smallest form factor for this device on the market. The Nanopoint joystick is only 3.3mm high, with a diameter of only 12.7mm, which makes this design ideal for cell phones, gaming, GPS and other multimedia applications. Full analog variable control of a joystick allows for almost infinite positioning capability, full proportionality and better control on a small handheld display. 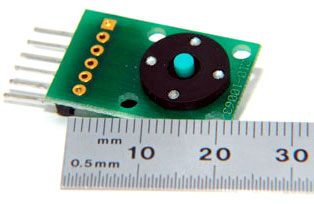 In addition to having the world’s smallest form factor, Varatouch’s model will enable designers to take advantage of long life, low power consumption, instant wake-up and variable speed advantages that this technology offers. Other devices available in the market can’t compete with the simplicity and total control that the Nanopoint joystick has to offer.

“Our customers have asked for really small analog joysticks. This Nanopoint is an integral product (for our partners) in the wireless and gaming industries, for development of their next generation handheld devices,” says Craig Vachon, CEO of Varatouch.

“Although these days ‘digital’ is thought to be synonymous with ‘better,’ the reality is that the current crop of digital phone user interfaces are quite poor. Digital directional navigation buttons only allow us to move in four directions at one speed or naught,” says Derek Kerton, Principal Analyst of the Kerton Group. “The analog Vsense technology in Varatouch’s joysticks allows users to move in infinite directions at variable speeds. This is extremely useful in navigating complicated user interfaces, long lists, productivity applications and advanced games available on today’s mobile phones.”