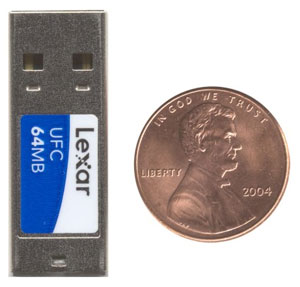 Lexar has come out with a very useful and compact type of portable memory. It is obvious a USB Flash Drive will be limited to the size of the USB connector, so Lexar has gone and imbedded memory directly into the USB module, making it the smallest Flash USB Drive we have seen yet.

Lexar is hoping this device will replace current portable flash memory chips like CF and SD, but it could take a while for that to happen. First manufacturers would have to adopt the USB type interface for a USB type drive, and the software to control such a device. It would be a great addition for a camera since you could easily plug the card directly it into any USB port to access the images.

The new USB card form factor is based on the USB Type A connector as outlined in the Universal Serial Bus Specification. A mere 12 millimeters wide, 4.5 millimeters high and 31.75 millimeters long the card is no longer than the diameter of a penny. At half the width and a little more than twice the height, it is volumetrically similar to an SD card. The rugged, sturdy metal housing is intended to make the USB card suitable for use in a range of environments.

Lexar’s USB FlashCard will be the first product based on the new form factor. The USB FlashCard will offer universal plug and play connectivity with all modern operating systems leveraging the ubiquity of the USB interface. Lexar plans to introduce Full-Speed USB versions in 16MB, 32MB and 64MB capacities as well as Hi-Speed USB versions in 64MB, 128MB, 256MB, 512MB and 1GB capacities with a high performance 60MB/s interface speed in 2005.

“Lexar’s USB FlashCard will offer unparalleled ease of use by leveraging the pervasive USB interface,” said Petro Estakhri, Chief Technology Officer, Lexar. “Moving forward, our intent is to leverage the open standard to create technology that is feature rich in terms of security, provides an easy interface and is built on an environmental design that meets general standards for almost all of today’s computing, consumer and mobile electronics devices using non-volatile storage.”

“USB flash drives have seen a tremendous success as external flash based storage devices and are now the preferred medium of choice for a wide range of professional and consumer users for transferring data,” said Steffen Hellmold, General Manager of OEM Products, Lexar. “This new form factor enables the use of USB flash drives beyond computing applications, realizing the dream of connecting the worlds of computing, consumer and mobile applications through a universal USB FlashCard.”