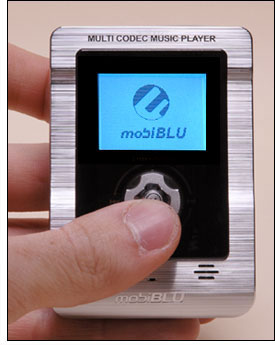 The MobiBLU DHH-100-5 Digital Audio Player is a slightly chunky 5GB unit with several unique features not found on any other device in this category. It was officially released to North American markets last month by Hyun Won America Inc., which up until 2 years ago was only offering products to the Korean market.

When I first took out the DHH-100-5 from the packaging, it reminded me of an iRiver mp3 player design, it had a glossy black plastic front display and a brushed aluminum styled face-plate. I always thought brushed aluminum looked cheese (atleast most the 3D textures do), but in this design it looks quite classy. Even though it is a little blocky, it is comfortable to hold and still looks very small, it’s like holding a cube. The unit measures 3.0 by 2.1 by 0.8 inches, making it smaller and lighter than the iPod Mini (but not thinner), but maybe a bit too light. At 3.5 ounces, it did feel a little empty inside and not as solid as the iPod.

The face on the DHH-100-5 has only one control, the thumb-stick; this lets you enable the menu by pushing in, adjusting the volume with up and down, and skipping back and forth between tracks with left to right (much easier and more reliable than the iPod Mini navigation, which tires your thumb out by not responding to the counter-clockwise thumb motion used for navigating menus and tracks). Below the thumb-stick is the micro stereo speakers that are actually useable for music, although they are mainly there for voice recorded playback. Have you seen that Nokia 3220 commercial, with those teenagers gathered around the phone listening to some overly trebled track, well, it sounds very similar.

A six-line greyscale display measuring 30 x 20 mm will show important modes that are currently active. In the top row; Play Status, File Type, Play Mode, EQ and Battery icons are displayed. The next line scrolls the apparent folder name, followed by the ID3 track title and then the file name, at the very bottom left is the song number in relation to all the tracks on the device with the track time next to that.

On the right side, we have the reset button, record mode button and the Play/Pause button, which also doubles as the power button when held in for a couple seconds. The top has a USB port, line input for audio recording, headphone jack and a remote interface for an optional remote. On the left is the EQ button, this will allow you to change through the 10 user defined EQ settings, or the pre-defined Normal, Rock, Jazz, Classic and Pop settings when tapping it quickly. If you hold the EQ in for a bit longer it will toggle to folder view mode so you can quickly scroll through tracks (scrolling speed can be adjusted from the settings). Next is the DC in for charging and a hold button to prevent from any in-pocket accidents.

On the bottom is the SD expansion slot, I was slightly disappointed when I found that a few important features were not available. You cannot play MP3 tracks directly from the SD slot, and you cannot access the SD slot via USB if it is connected to your computer. I was really hoping to add another 1GB to the existing 5GB. The device is setup only to dump data (photos from your camera or MP3 tracks) from an SD card onto the internal 5GB micro drive. Still a very usable feature that is not available on any other 5GB device.

Please note: There is no way of knowing if your files are on the device by the menu system, it will only show files with the .mp3 or .wav extension. If you are transfering photos or other data you will just have to trust that they were copied (when the transfer is complete it will say “transfer complete”) and check it later when you connect it to your computer.

With most features found in smaller flash based players on the market, the DHH-100-5 being a drive based player under $250 surely loads up in this department. Recording audio is possible from either the line input or built-in microphone. Voice recordings will encode to mp3 at 64k (180 hours) and 192k (60 hours) via the line in. Although it lacks an FM tuner or transmitter, I really don’t mind it not being there. With this much storage on hand, you don’t have to worry much about your library running out.

Playlist support was left out of this version. New versions may add support, but by just using an organized directory structure you will forget about even having them.

The unit charges fairly quickly, 3 hours will top it up, but when transferring data from your computer over USB 2.0 you will be draining power. I was really disappointed to find the battery drop, this down side however, is made up for with battery life. The specs say about 10 hours, I actually had it going for 12-13 hours even while using the external micro speakers (this time was recorded from a full charge after the files were transferred).

Browsing tracks is very fast, you can even adjust the scrolling speed in the display settings. An audible beep will annoy you at first, but this can be disabled in the menu.

The built-in mic will pickup your voice clearly when held up to your mouth, only good for close range memos. If you want something more long range, you could plug in an external microphone or record from an external audio source via the line in jack.

The SD transfer slot will rip data from a standard SD card at about 1 megabyte in 7.6 seconds, a 512MB card would take just over an hour to rip.

Audio out through the headphone jack to any source is very clear, the quality is comparable to your PC or notebook audio out and will not disappoint you. However the headphones that come with the unit have excess treble and not much warmth, your best bet is to replace these. Line-in recording is also very crisp and distortion free, although it maxes out at 192k, it would be a great way to record the radio or encode your vinyl to mp3.

Bang for your Buck

At $229, you really are not going to find something this small and feature packed on the market right now, especially in the 5GB range. The DHH-100-5 is currently only available from CompUSA and MobiBLU America.