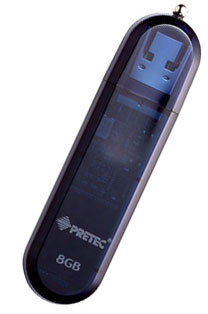 Pretec has announced their plans to mass produce an 8GB flash memory-based USB flash drive. Sure 8GB is a heckalot of space for movies, music, mail and documents, but the possibility of carrying around a complete mobile software-based computer setup would allow for the ultimate workflow mobility to mobile professionals.

With a dual channel hi-speed USB system, the Pretec i-Disk II 8GB claims to transfer data with read speeds of 16MB/sec and write speeds of 12MB/sec. Exact measurements and weight were not released, but we do know it will come bundled with FlashMail, MobileLock and SecretZip to allow secure and encrypted data security.