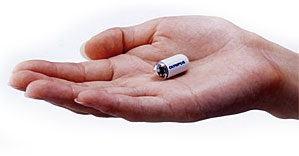 Olympus Japan has unveiled their wireless pill camera to medical facilities in the US, Europe and Japan. It seems to be identical to the Wireless M2A capsule, now known as the PillCam, we reported on earlier in May.

The single lens version maintains the same specifications as the PillCam, with an added dual-camera version that can capture images from both sides of the pill. It measures 26×11 mm and will capture 2 frames per second for 8 hours on the built-in battery, or 5 frames per second using radio supplied electricity. Each capsule contains a sophisticated magnetic control mechanism that can maneuver on the X, Y and Z axis for complete control when navigating inside the body.