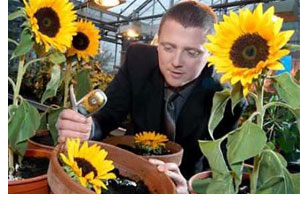 Pvaxx Research and Development firm, along with researchers from the University of Warwick in Britain, have developed a polymer that resembles any normal plastic but will biodegrade into soil leaving no toxic waste. The plastic polyvinylalcohol polymer that has been under development for the past five years, contains a sunflower seed, which will feed on the nitrates that are formed in the plastic-like cover when it turns into waste.

Imagine fields of millions and millions of Sunflowers all created by the millions and millions of discarded cell phones that are thrown out each year. Although the entire phone will not be biodegradable, atleast the cover will provide some relief to nature. Motorola has not released plans for a new phone to use this cover yet, but it is expected to be out by Q2 of 2005.