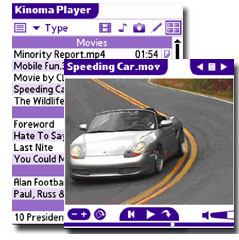 The latest version of the Kinoma Player 3 EX was released today, it will now support MPEG-4 video and AAC audio files on handhelds running Palm OS 5. The MPEG-4 compression support will now allow for more than seven hours of high quality video to be stored on a single 1GB memory card. Kinoma Player 3 EX will sell for only $19.99, if you would like to convert your MPEG-1, MPEG-2, WMV, WMA, QuickTime, AVI, DV, DivX, WAV, AIFF and MP3 formats and compress them to MPEG-4 files for use on the Kinoma Player, you will have to purchase the Kinoma Producer 3 for $29.95.

Kinoma Player 3 EX supports major digital media industry standard file formats.4 In many cases, users can take a memory card out of their digital camera, plug it into their handheld, and immediately view the video and photos using Kinoma Player 3. The MPEG-4 “.MP4” file format is featured in Kinoma Player 3 EX, as the most compact and compatible way to store your digital video. Users can also play .3GP and .3G2 files captured by the built-in camera on many mobile phones. Kinoma Player 3 EX also supports viewing JPEG photographs and some QuickTime movies, as well as the Kinoma movie file format.

Even with all the advanced technology it packs, Kinoma Player 3 EX remains easy to use. Kinoma Player 3 EX offers an innovative pan, zoom, and rotate feature for video and photographs so users can quickly get exactly the view they want on their content. Pan, zoom and rotate happen immediately – even when playing video – a new user experience on handhelds that has to be experienced to be fully appreciated. Kinoma Player 3 EX remembers where you left off watching a video or listening to a song, and can automatically start from that point the next time. The user interface of Kinoma Player 3 EX also makes it easy to find and play digital media. Media can be browsed by individual media type – video, audio, and photographs – or all at once. The media browser supports sorting and a new two line detailed list view.

Kinoma Player 3 is available for download free of charge with registration, and is compatible with all Palm Powered handhelds running Palm OS 5 (Garnet) or later.