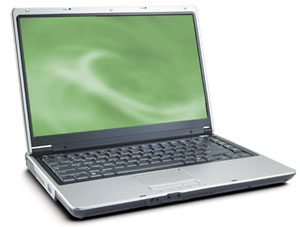 Gateway is now offering a 1.2-inch thick notebook PC that weighs in at 5.3 pounds and has a 14.1-inch WXGA widescreen display.

The more expensive $1099 version gives you a boost to 512MB RAM, but drops your processor down to 1.4GHz, other than that there isn’t much more. They both come with an Integrated 4-in-1 Memory Card Reader and ship immediately.