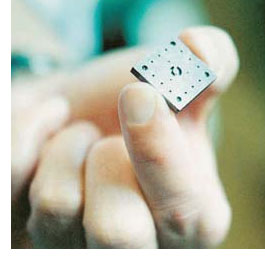 A miniature jet engine that measures less than the size of a five-cent piece, spins at 1,000,000 revolutions per minute and may be the future power source for wireless devices. Alan Epstein, director of MIT’s gas turbine laboratory holds a chip sized turbine that is designed to produce enough electricity to power hand-held electronic equipment.

Turbine engines produce amazing amounts of power, three 747 jets can output roughly the same amount of power as a nuclear power plant. The tiny turbines will first go out to soldiers, then to consumers.

One of these micro gas-turbine engines could run for 10 hours on a D-sized battery container of diesel fuel. It also has some drawbacks, the engine produces a stream of hot gas, so unless you want to burn your pants off, it won’t be designed for pocket use.

(Read more from the source. via FuelCellWorks.com)