MontaVista Linux has been the chosen backbone to the recently announced Panasonic N900iL and the NEC N901iC handsets to be carried under NTT DoCoMo. The 3G mobile phones run on the W-CDMA and 802.11b wireless LAN protocols. This will be the first VoIP and cellular combination phone to hit the streets, and it’s linux! 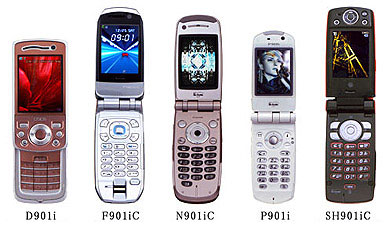 MontaVista Software, Inc., today announced that MontaVista Linux is the chosen operating system for three of the new FOMA third-generation (3G) mobile phones from NTT DoCoMo, Inc. These MontaVista Linux-based phones include the N900iL and the N901iC, both developed by NEC Corporation, and the P901i from Panasonic Mobile Communications Co.. Ltd., a subsidiary of Matsushita Electric Industrial Co., Ltd.

The N900iL is a dual network mobile phone, which supports W-CDMA and 802.11b wireless LAN, and is targeted for corporate users. It can run on NTT DoCoMo’s 3G wireless network — FOMA — and also as a VoIP mobile phone over a wireless LAN (local area network). It even permits phone users to access information and files behind corporate firewalls. The NEC N901iC and the Panasonic P901i handsets will feature 3D audio, improved security features, the ability to transfer larger file sizes (up to 500KB) and enhanced multimedia applications.

“NTT DoCoMo has specified Linux as a primary operating system platform for its next generation phones. And, handset manufacturers, such as NEC and Panasonic, are embracing Linux for phone development because of its flexibility, control and opportunities for innovation,” said Jim Ready, CEO and president, MontaVista Software. “As mobile phones evolve rapidly, the software supporting their rich functionality and networking capabilities needs to be equally robust. MontaVista Linux provides a powerful systems software platform that can help to quickly bring these advanced products to market.”

MontaVista Linux supports a range of enhanced interactive features in advanced consumer electronics products such as the N900iL, the N901iC, and the P901i, by providing high performance, real-time capability and consumer-grade reliability. MontaVista Linux allows easy integration of advanced multimedia applications required by 3G handsets. By offering a standard development platform for wireless handset designs, MontaVista Software empowers developers to focus on their value-add to their customers while enabling them to speed cutting-edge products to market in a cost-effective manner.

The new phones were on display at the MontaVista Software booth at the Embedded Technology Show, Yokohama, Japan, November 17-19, 2004.