Nintendo is taunting us once again with more news about the DS. They will ship 1 million units throughout North America on November 21st, that is only 3 days away! The dual screen system with touch-screen and voice-recognition will also support two forms of wireless connections, Bluetooth and 802.11. There isn’t much that we don’t already know, so here is a fancy picture of the box. Office Depot via Amazon was saying they ship it in 1-2 days for $149.99 but now that is gone, Target has a bundle for $199 and it will ship November 24th. 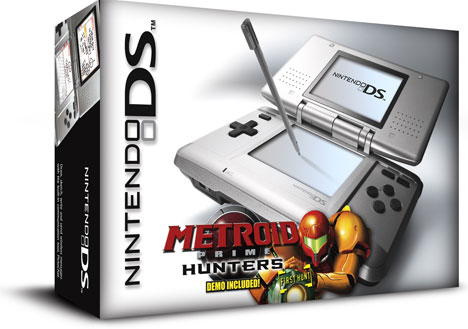 
Nintendo DS Puts New Experiences Only a Touch Away; On Nov. 21, the First Nintendo DS Owners Step into the Future of Video Games

If you’ve ever enjoyed video games, you’ve likely played Mario, Madden or Metroid, The Sims or Spider-Man — but you’ve never played them like this. The names and characters might be familiar, but now you can interact with them in completely new ways.

On Nov. 21, just in time for the holidays, gamers across North America will begin snapping up the most innovative game platform in a decade, the Nintendo DS. Boasting dual screens, touch-screen and voice-recognition interfaces and two forms of wireless connection, the 1 million Nintendo DS units available in North America already are expected to be depleted by year’s end.

“Retailers began calling for more Nintendo DS units even before the first ones arrived,” explains Reggie Fils-Aime, Nintendo of America’s executive vice president of sales & marketing. “They’re reflecting the demands of game players for entirely new ways to enjoy games — not just playing the same old games on a different platform. It really comes down to delivering a new experience and that’s what we’re doing.”

Nintendo DS comes embedded with the PictoChat communication feature and bundled with a playable demo of the upcoming Metroid Prime Hunters. In addition, the system will have a dozen titles available during its launch window, spanning every genre, including Super Mario 64 DS from Nintendo, Madden NFL 2005, Tiger Woods PGA TOUR Golf and The Urbz: Sims in the City from EA, Spider-Man 2 from Activision, Ping Pals from THQ, Feel the Magic: XY/XX from SEGA, Rayman DS and Asphalt Urban GT from Ubisoft and Ridge Racer DS and Mr. DRILLER: Drill Spirits from Namco.

By the end of March, the Nintendo DS game library will include 20 to 25 games. More than 125 games remain in development worldwide, from Nintendo as well as every major third-party developer. And because Nintendo DS is backward compatible with Game Boy Advance SP games, it already has a library of more than 550 games.

“Interest in Nintendo DS is very high as we head into the holidays,” says Jeff Griffiths, CEO and president of Electronics Boutique. “This is a must-have item for a wide variety of people, older and younger, this holiday season.”

Nintendo DS will sell at an MSRP of $149.99. Its clamshell design protects both screens, and its rechargeable battery allows for six to 10 hours of play on a single charge. The launch is being supported by an aggressive, multifaceted marketing program, which includes the “touching is good” campaign that targets a hip, male demographic in lifestyle magazines and on hot broadcast and cable television programs. Additional information about Nintendo DS is available at www.nintendods.com.

Nintendo DS launches in Japan on Dec. 2. By the end of 2004, Nintendo will ship 2 million units worldwide and another 2 million by the end of March.