Three new digital audio players were unveiled last week from Sony under the Aiwa brand. The players will be constrained by the Digital Rights Management (DRM) technology and by a special driver that needs to be on your computer when installing the SonicStage audio transfer application. Sony loves putting themselves in a position where it’s either our way or the highway. The three players will support ATRAC3plus, ATRAC, and MP3 playback, the models are the XDM-S700 (256MB), XDM-S500, (128MB) and the Bluetooth-enabled XDM-S710BT (256MB).

The XDM-S500 and S700 both have FM Tuners, while the S710BT does not, but will support Bluetooth headsets. Sony is on the right track, but they still have a long way to go before they take any substantial market share, get rid of the proprietary software, I don’t even need to mention DRM, then we may have something here. 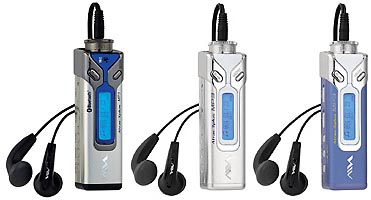