Siemens has released the Gigaset M34 USB adapter to Internet users in Europe. What it will do is allow you to access Skype VoIP services, including free Skype to Skype calling, using several different models of Siemens’ Gigaset cordless phones.

Skype’s free Internet telephony software works with Siemens phones via the Gigaset M34 USB adapter, an open interface adapter that is plugged into the USB connection point of a users’ PC. It communicates with the phone’s base station to either make or receive a Skype call. The handset then enables users to gain cordless access to the extensive Skype features including, free Skype to Skype calling, buddy lists, the Skype Global Directory and conference calling.

“We launched the Siemens Gigaset Internet telephony solution so that consumers can benefit from cheaper or even free-of-charge calling and messaging,” said Paul Reitmeier, President of Customer Premises Equipment (CPE) Devices of Siemens AG – Communications. “We are delighted to be working with Skype to offer Internet users an enhanced traditional phone experience.” 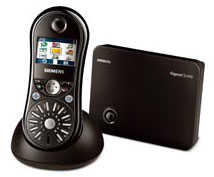 “Siemens continues its pioneering innovation by delivering a giant step forward for Internet telephony and messaging services for the residential market,” said Niklas Zennstroem, Skype CEO and co-founder. “Skype is expanding the range of complimentary platforms to provide consumers with choice and flexibility alongside the quality gains and cost-savings of modern calling.”

The adapter is available at retail outlets, including an up-to 120 minutes free Skype Out telephony voucher. Prices are available locally. www.siemens.com/gigasetm34usb.