Several new portable media devices are expected to hit the market this year, all powered by the Sigma Media Processors, these devices create a new category of portable entertainment products. They differ from current portable media players on the market since they have no screen. These are designed for people that would like to bring entire multimedia collections with them anywhere. 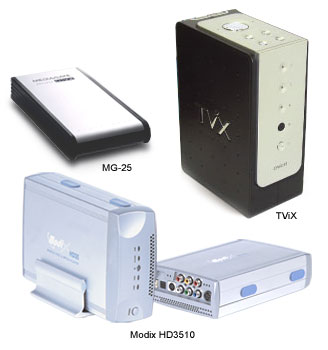 Once you load the files onto your portable media player via USB 2.0 from your computer system, you can then connect it to any type of composite, S-video and component video output or any stereo and SPDIF for high-quality audio output. Control will be on-screen via a linux style file system manager, a remote control will allow you to control all playback options and configuration settings on your portable players.

More detailed specs from the press release on each of the three players released;

As one of the first products on the market, AL Tech has recently launched its MG-25 portable multimedia player which includes an integral 2.5″ hard disk drive. The MG-25 is based on Sigma’s EM8510 digital media processor and is a sibling model to its already launched MG-100, a desktop DVD/DivX player with network and USB host connectivity. The MG-25 is positioned as a performance-price value leader and will be marketed on a worldwide basis.

The MG-25 is available now directly from AL Tech.

The MODIX HD-3510 From DTS Infocom

Another new addition is the MODIX HD-3510 from DTS Infocom, which features an integral 3.5″ hard disc drive with up to 400 GB of storage capacity. The MODIX HD-3510 is based on the Sigma’s EM EM8511 digital media processor which provides complete audio/video processing and system control features. The MODIX HD-3510 features a wide range of media format options, HD Component output with programmable upscaling, and Digital 5.1 channel surround sound. It also offers an option for car audio/video applications.

The Modix HD3510 is available now directly from DTS Infocom.

Also new on the market is the TViX from Dvico, which features an integral 3.5″ hard disc drive with up to 250 GB capacity. The TViX is based on Sigma’s EM8510 digital media processor and supports video decoding for DivX 3.11, 4.x, 5.x, XVID, AVI, MPG, DAT, and VOB and audio decoding for PCM, MP3, Ogg Vorbis, WMA, AC3, and DTS. The TViX supports Video Out in both standard 4:3 and widescreen 16:9 high definition resolution. Dolby 5.1 channel surround sound, and offers an optional car-pack system.

The TViX is available now directly from Dvico.