Lexar has added two new flash-based MP3 players to their product line. The LDP-600 offers a built-in FM radio transmitter and comes in capacities of 256MB and 512MB with an extra 1GB via an SD card slot.

The LDP-400 is a compact MP3 player that comes in 128MB or 256MB sizes and will run for 12 hours on a single AAA battery. They seem quite small for players to be released this time of year, however adding the SD slot on the LDP-600 may allow it to make a place in the market. No prices on either player have been announced by Lexar, but they are already showing up allover retailers online for pre-order. 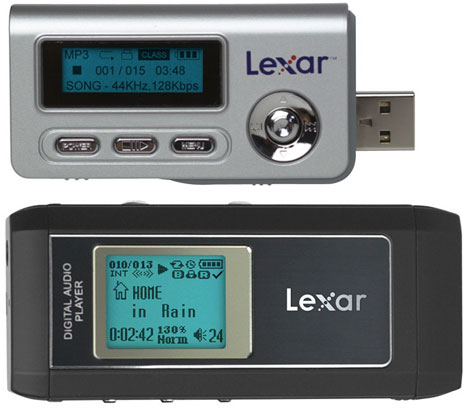 Lexar’s new digital music players support both MP3 and WMA music formats as well as Microsoft Digital Rights Management (DRM), the LDP-600 and LDP-400 both play music purchased from on-line music retailers. The LDP-600 is one of the most robust and full featured offerings in its class with an integrated FM radio transmitter that locates any available FM frequency and broadcasts directly — without cables or adapters — and takes the place of cumbersome CD changers in the car and home. For added functionality and convenience, the LDP-600 also features a built-in FM radio with the ability to record FM broadcasts as well as a digital voice recorder to take annotated notes for later playback.

In addition, users can choose from seven color choices for the backlit LCD display, to further personalize the unit. The multi-color display also makes it possible to easily navigate even in poorly lit environments. To further enhance the listening experience, the LDP-600 comes complete with high-performance, lightweight Sennheiser Electronic Corporation’s MX-400 earbud headphones for clear, rich music reproduction. The LDP-600 uses a rechargeable lithium polymer battery, providing over 14 hours of playback on a single charge.

For consumers who are on the go, Lexar’s LDP-400 digital music player offers a compact design making it ideal for use when exercising or commuting to class or work. For added convenience, it features a slide-out USB connector to simply drag and drop music files directly from a PC. LDP-400 can also be used as a USB flash drive to quickly and easily transfer any file from one computer to another. The LDP-400 uses one AAA battery to accommodate its small size while providing more than 12 hours of battery life. The LDP-400 is powered by SigmaTel, Inc., a market leader in high-quality MP3 audio controller chips.