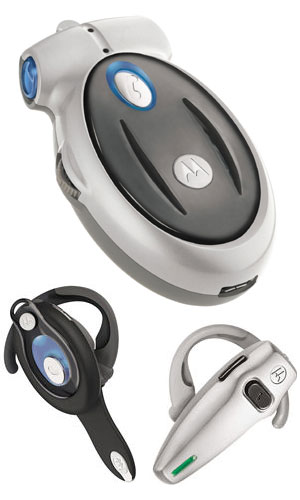 Motorola is offering four new Bluetooth headsets to the North American market, the HS850 and HS805 feature improved battery life and echo cancellation, the HS830 can be worn as a necklace and the HF800 wireless speaker. Motorola also released a bunch of USB adapters to add Bluetooth support to older mobiles without it, all devices are expected to ship Q4 of 2004.

Demonstrating its commitment to deliver market leading wireless communications to consumers, Motorola today announced the launch of its new Bluetooth products which build on Motorola’s already extensive and popular portfolio.

Bruce Hawver, Global Vice President for Companion Products, Motorola said: “Motorola believes people need smooth transitions from home to car and everywhere in-between. An integral part of this vision is based on Bluetooth wireless technology – connecting people to people, people to things, and things to things. Motorola is committed to strengthening its Bluetooth portfolio, and this new range of products will ensure that Motorola continues to be seen as a provider of functional yet fashionable technology in this area.”

Included in the announcement, are upgrades to several of Motorola’s popular Bluetooth headsets and accessories, including:

Motorola Wireless Pendant Headset HS830 with Bluetooth – Fashion or function? Motorola’s new stylish concept necklace headset packs all the functions you would expect from a Bluetooth headset, with a convenient module that is worn around the neck. The unit comes with a cool five hours of talk time to satisfy even the chattiest individual. Also available is the Wireless Helmet Headset HS830, bringing all the functions of Bluetooth to motorcycle aficionados who are constantly on the move. Available: Q1 2005.

Motorola Wireless Speaker HF800 with Bluetooth – This wireless speaker retains all of its classic style, but the refreshed HF800 will pack more talk time and better audio capabilities into an already popular package. Available: Q4 2004.

For users that love to enhance their phones, Motorola has announced a range of Bluetooth USB adaptors (PC800/805/820/825). Compatible with most standard PCs and Bluetooth handsets, these devices offer an easy way to manage contacts and data. Also available is Mobile PhoneTools version 3.0 software, which enables consumers to synchronise mobile and PC, as well as manage ringtones, screen savers, images and audio. Available: Q4 2004/Q1 2005.

More information on the products and costs can be found on www.hellomoto.com