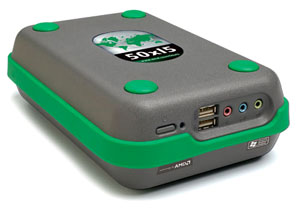 AMD is planning a massive rollout of their new Personal Internet Communicator (PIC) device, a part of their 50×15 strategy. The PIC will offer affordable, managed Internet connectivity in a Windows-based environment to 50 percent of the world’s population by 2015. As it stands now, the main buyers are India, Mexico and the Caribbean, these will be the first customers of the $185 PIC. The specs are pretty descent for basic computing functions, you’re not going to be playing Quake 3 or anything, maybe solitaire.

To foster the rapid adoption of technology in high-growth markets throughout the world, AMD today formally unveiled a business strategy with initial participants in India, Mexico and the Caribbean to enable 50 percent of the world’s population with Internet connectivity and computing capabilities by 2015. As part of its 50×15 strategy, AMD is announcing the Personal Internet Communicator (PIC), an innovative consumer device that enables affordable, managed Internet connectivity and offers Microsoft Windows-based computing capabilities to help fulfill the communication, education and entertainment needs of people in high-growth markets.

The PIC was developed as one solution in support of AMD’s global “50×15” initiative aimed at driving Internet and computing capabilities to half of the world’s population by the year 2015. The primary goal of the “50×15” initiative is to leverage the benefits technology provides to enable economic-growth potential in high-growth regions of the world largely untouched by modern communication tools.

In conjunction with the introduction of the PIC, AMD announced customers in various countries around the world, including the TATA Group in India, CRC in Mexico, and Cable and Wireless in the Caribbean. TATA is the first company to embrace and distribute the PIC in its respective region. TATA will market the PIC and offer it initially to consumers in five cities in India. CRC will work with local distributors in Mexico to offer the PIC along with a suite of educational software. Cable and Wireless is deploying the PIC in support of disaster relief efforts throughout the Caribbean. AMD is diligently working with other customers in several regions to make the PIC available to consumers in high growth markets throughout the world.

“Technology is only as powerful as it is accessible,” said Hector Ruiz, chairman, president and chief executive officer of Advanced Micro Devices. “With 50 by 15, we are creating a global ecosystem of partners to bring the benefits of technology and connectivity to parts of the world ignored by traditional technology solutions. We see the power of computing not only to educate and unleash the creativity of people, but to create significant business and economic growth opportunities for companies and entrepreneurs who can help bring billions of people into the modern technology era.”

Introducing the Personal Internet Communicator
The Personal Internet Communicator is designed to be an easy to use, affordable consumer device that provides managed internet connectivity and basic computing and Internet capabilities such as a browser, e-mail, productivity tools (word processing and spreadsheet), and the ability to view images, multimedia files and standard format documents. More information and pictures of the new device can be viewed and downloaded at www.amd.com/50×15.

“We are fully in favor of innovative programs that address the issue of digital inclusion,” said Microsoft’s Chief Technology Officer Craig Mundi. “Through this collaboration with AMD to deliver a low-cost Windows Powered solution for first-time computer users, we hope to bring India’s citizens one step closer to realizing the tremendous social and economic opportunities enabled by technology.”

The PIC is branded, marketed and sold by local service providers such as telecommunications companies and government-sponsored communications programs. Pricing to the consumer is determined by the service provider, which may offer variety of subscription, microfinancing options and bundling packages at different price points. Microfinancing in the form of payment plans helps consumers avoid large, up-front cash deployments at the point of sale. Suggested system price point is $185.00 with a keyboard, mouse, and preinstalled software; or $249.00 which also includes a monitor.

To help ensure 50×15 is successfully adopted within target high-growth markets, a customer-centric business model has been developed that eliminates many of the barriers to adoption. Rather then merely building PIC systems, AMD is taking a geo-sensitive approach by proactively working with – and creating opportunities for – local manufacturing, distribution and financial partners. Developing an in-country value chain is an essential part of ensuring that the technology gets into the hands of those who need it most, and that the business ecosystem develops and spreads within the markets the products ultimately serve.

“Technologies developed for mature markets cannot be dropped into new markets and then be expected to succeed,” said Shane Rau, Program Manager, IDC. “Despite the virtues of such low-cost and standardized technologies, they must still be arranged to solve a problem for the customers in that new market. In a regional or country market, having local relationships, such as with manufacturers, distributors, and service providers, is key.”