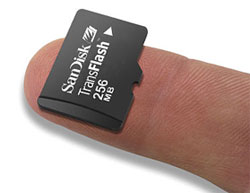 SanDisk has announced the largest and smallest flash memory card in the world, the 256MB TransFlash. Measuring a mere 15 x 11 x 1 mm, roughly one-fourth the size of an SD card. The TransFlash has been primarily developed for use in mobile camera phones to store images, movies and mp3 files.
See press release below.

SanDisk Corporation today introduced the highest capacity yet for its small TransFlash memory module, a 256 megabyte (MB) unit that will help meet the demands of new feature phones for greater storage of digital music, video, digital photos and GPS navigation software. The announcement was made at CTIA Wireless I.T. & Entertainment 2004 at Moscone Center, where SanDisk is exhibiting at Booth 924.

Unveiled by SanDisk in February, the TransFlash module is about one-fourth the size of a standard SD card but can be inserted into an adapter and used in SD-enabled devices. It is the world’s smallest removable flash memory module, measuring 15 x 11 x 1 millimeters or roughly the size of a fingernail. SanDisk expects to supply worldwide OEM and retail customers with the 256MB model starting in December, with pricing and exact availability varying according to geographic region.

Alan Niebel, primary analyst for Web-Feet Research, a memory and storage market research firm in Monterey, Calif., said that one of the new functions demanding more memory is video. “With TransFlash reaching 256MB capacity and beyond, the video market on cell phones opens up for storing large amounts of data on the smallest form factor available,” he said. Phones that are capable of putting video on TransFlash modules will be able to capture and play back television broadcasts, sports and news clips, movie and music video trailers, and some advertisements, he added. Niebel forecasts that video stored in mobile phones could become one of the largest consumers of flash memory, reaching over $3.6 billion by 2009.

Rex Sabio, SanDisk’s product marketing manager for TransFlash OEM, said that more models from handset manufacturers are offering multimedia features such as music downloading and playback, which in turn require higher memory capacities. “With additional storage capacity available, consumers will be able to store entire albums rather than just a couple of songs on their phones,” he said. “We’re also beginning to see models that offer GPS navigation and mapping functions, which require substantial memory.” Since the TransFlash module is removable, it offers consumers and manufacturers maximum flexibility in deciding how they want to use it, he added.

The first company to incorporate TransFlash was Motorola, which currently has several phones that are designed for it, including the Motorola V710, a clamshell model. That unit features a built-in 1.2 megapixel digital camera and an integrated MP3 player.