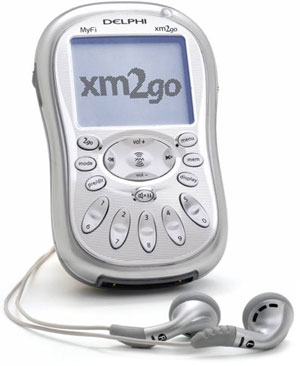 Delphi MyFi is the first portable handheld XM satellite radio, it will run you $350, not including subscription fees, and can even store up to 5 hours of content on the device.

The XM MyFi comes with a load of accessories, aside from the rechargeable battery, you get headphones (no doubt), a remote control, belt clip, carrying case, home and vehicle connection kit.

Delphi Corp. a pioneer of in-vehicle entertainment and electronics, and XM Satellite Radio, America’s number- one satellite radio service with more than 2.5 million subscribers, today announced a major milestone in consumer electronics — The Delphi MyFi, the first personal, portable XM2GO satellite radio that delivers XM’s Ultimate PlayList anytime, anywhere – at home, at work, in the car and now, on the go.

“The Delphi MyFi is the next generation of satellite radio,” said Francisco (Frank) Ordoñez, President of Delphi Product and Service Solutions, and Vice President of Delphi Corp. “This month marks the 50th anniversary of the portable transistor radio, which revolutionized the audio world. Today, Delphi and XM continue their tradition of satellite radio breakthroughs with MyFi, another industry first.”

The hand-held MyFi gives users the personal freedom to enjoy XM Radio’s Ultimate PlayList of more than 130 digital XM channels in two ways: a “live” listening mode and a time-shifting “memory” mode. The MyFi’s live mode enables users to listen live to all of XM’s 68 commercial-free music channels, plus premier news, sports, talk, traffic and weather channels. MyFi’s memory mode – called “My XM” — allows users to store five hours or more of XM’s outstanding content with the press of a button, even when the unit is not in use. The MyFi makes it possible to enjoy XM Satellite Radio anywhere, anytime, effortlessly.

“MyFi is a revolutionary product that dramatically expands XM Radio’s appeal and potential subscriber base,” said Hugh Panero, CEO of XM Satellite Radio. “Consumers have been waiting for a wearable satellite radio that also works in the car and home. XM and Delphi are thrilled to make this product a reality in time for the upcoming holiday season.”

XM also announced today that superstar Elton John will be featured in the national TV advertising campaign to launch the MyFi. The TV spot directed by award-winning music video director and photographer David LaChapelle is a humorously surreal celebrity “slice of life,” which follows Elton as he travels from place to place listening to his new hit song “Answer in the Sky” from his critically-acclaimed album Peachtree Road on his Delphi MyFi satellite radio.

The MyFi satellite radio (MSRP: $349.99) comes with all of the accessories needed to enjoy XM at home, at work, in a vehicle or on the go. As the most advanced satellite radio available, the MyFi offers a complete package of components and features:

The MyFi will be available at major U.S. retailers such as Best Buy, Circuit City, Crutchfield, and online sites in early December. MyFi is the newest member of the family of Delphi satellite radio products, including the acclaimed SKYFi2 and Roady2 plug-and-play radios.