Apple and U2 have teamed up to bring you a black enclosure iPod with red click wheel. That’s about all there is to it, many U2 fans have been pissed about them selling out to Apple. I myself am a U2 fan, I don’t see the big deal about this, every major band has to sell out to get where they are. When you see free mp3 downloads on their site, then we will start talking. 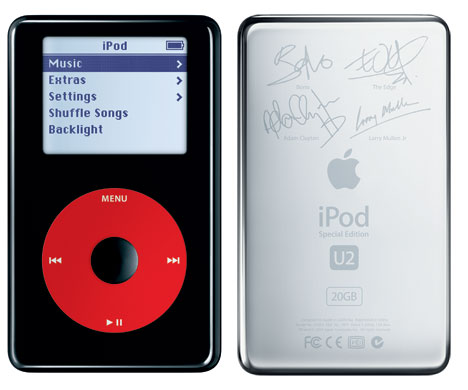 
Apple Introduces the U2 iPod

Apple today introduced the iPod U2 Special Edition as part of a partnership between Apple, U2 and Universal Music Group (UMG) to create innovative new products together for the new digital music era. The new U2 iPod holds up to 5,000 songs and features a gorgeous black enclosure with a red Click Wheel and custom engraving of U2 band member signatures.

“U2 and Apple have a special relationship where they can start to redefine the music business,” said Jimmy Iovine, Chairman of UMG’s Interscope Geffen A&M Records. “The iPod along with iTunes is the most complete thought that we’ve seen in music in a very long time.”

“We want our audience to have a more intimate online relationship with the band, and Apple can help us do that,” said U2 lead singer Bono. “With iPod and iTunes, Apple has created a crossroads of art, commerce and technology which feels good for both musicians and fans.”

“iPod and iTunes look like the future to me and it’s good for everybody involved in music,” said U2 guitarist, The Edge.

“U2 is one of the greatest bands in the world and we are floored to be working with them,” said Steve Jobs, Apple’s CEO. “We just want to make some innovative products together, and we hope U2 fans will love having their very own special edition iPod.”

The new U2 iPod is being introduced as the band prepares to release their new album “How to Dismantle an Atomic Bomb” in late November. In addition to the new U2 iPod, the results of the U2, Apple and UMG partnership include:

• U2’s single “Vertigo” from their upcoming album “How to Dismantle an Atomic Bomb” is available exclusively in the US through the iTunes® Music Store;

• Apple and U2 have created a breakthrough television ad featuring U2 band members performing their new single “Vertigo.” The ad is a cross between Apple’s award-winning “Silhouette” ads and a music video; and

• Apple has created the online music industry’s first-of-its-kind “Digital Box Set.” The first digital box set, “The Complete U2,” will contain over 400 tracks including all of the band’s albums and over 25 rare and unreleased tracks. U2 fans will be able to purchase and download The Complete U2 with just one click on the iTunes Music Store in the US and Europe beginning in late November for just $149 (US).

The U2 iPod features Apple’s patent pending Click Wheel, up to 12 hours battery life and Shuffle Songs, a command in the main menu that gives users instant access to one of the most exciting new ways to listen to their music library. All iPods work with Apple’s iTunes, providing music fans with the best digital jukebox on either a Mac® or Windows computer and access to the iTunes Music Store, the number one digital music service in the world. U2 iPod customers will receive a coupon for $50 off the purchase of “The Complete U2” available exclusively on the iTunes Music Store.*