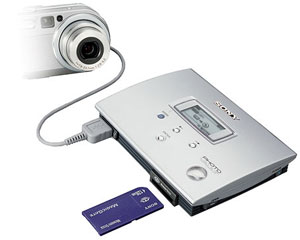 Sony Europe has launched the Photo Vault, a portable CD burner for photographers on the go. The Vault burns files from a memory stick card onto an 8cm Mini CD-R disc.

Sony is so stubborn it doesn’t surprise me that they have no other type of memory card support on this thing, they need to learn how to go with the flow, stop trying to monopolize everything.

This may be of use for the few that need to print photos from a memory card while on the road, but how many people need to do that? It may come in handy for traveling to visit friends and family. And besides, a Mini CD-R can only hold 185MB, at the price Sony will wan’t for the Vault, it will probably cheaper to just buy more memory cards (if your plan is using it for an image backup solution).

At Photokina 2004, Sony will be launching the ultra-portable PHOTO VAULT “Burn & Play” solution, a portable Mini CD-R Station targeted at digital photographers on the move or on holiday. The PHOTO VAULT enables users to burn digital photos on an 8cm CD-R disc and so free up memory space on the camera itself, then share them with others and watch the photos as a slideshow on a TV. The new Mini CD-R Station and photo player has a built-in Memory Stick slot and USB interface as well as a video output to TV, meaning users have no requirement for a PC when wanting to save or view photos.

Céline Haffner, European Product Manager for Sony’s IT Media department said, “The PHOTO VAULT is designed to make life easier for the increasing number of digital photography lovers. Running out of space on removable storage media when using a digital still camera or a smartphone while travelling is no longer a problem as the new PHOTO VAULT transfers the files onto 8cm CD-R discs allowing room for more photos. PHOTO VAULT is actually the latest in a trend of highly portable and convenient PC-free products, such as printers with memory card slot”.

PHOTO VAULT uses 8cm CD-R discs each containing 200MB of storage space, the equivalent of around 200 digital images, depending on image resolution. It accepts digital photos from three different sources, directly from Memory Stick, from USB Storage Media and from digital still cameras with their own storage media connected via the standard USB interface. All operations can be easily controlled and monitored by the product’s 4 buttons and LCD display.

JPEG photos stored on these 3 sources or on 8cm CD-R discs can be viewed conveniently on a TV screen when connected to the video output. Images can be controlled by the on-screen display which features index pre-view, image rotation and slideshow functions.

PHOTO VAULT supports 4X maximum write speed, allowing users to record a full disc in approximately 9 minutes. In ‘Multi-session’ mode an 8cm CD-R disc can be recorded in several steps before finalising the disc. The user will be asked to insert additional discs if the source contains more than the 200MB of images which fit on one 8cm CD-R disc. The high burn-speed and portability of PHOTO VAULT means that several copies of 8cm CD-R discs containing images can be burned quickly in one place. This means users can distribute copies quickly and easily to friends and family after events such as parties or weddings.

With four AA size Alkaline or rechargeable batteries up to 10 8cm CD-R discs can be recorded on the move, making the PHOTO VAULT a truly portable device. An external battery case is supplied with the product, as are an AC adaptor, a video-out cable and a blank 8cm CD-R disc. The tiny 8cm CD-R disc used by the PHOTO VAULT ensures that the unit measures just 112 x 91 x 24 mm and weighs less than 200 g (112 x 128 x 24 mm and 218 g with battery case, excluding batteries), setting it apart from the standard 12cm based products in the market.

The PHOTO VAULT will be available in Europe from October 2004.