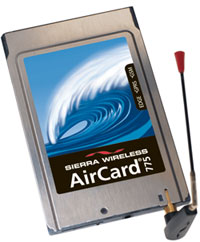 Sierra Wireless is now offering the AirCard 775 wireless GPRS card on the AT&T Wireless EDGE network. For $300 and a possible $150 rebate for signing up on the unlimited rate plans, you can wirelessly surf the net with speeds ranging 100 and 130 kbps, half the speed of the new Sony Ericsson GC89 announced today, and minus the 802.11g Wi-Fi capabilities.