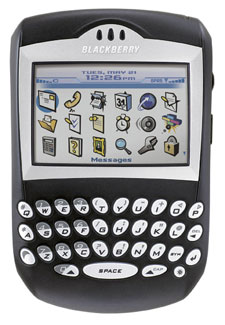 Rogers Wireless in Canada will be offering the quad-band BlackBerry 7290 mobile phone communicator. Starting in November, the 7290 with e-mail, phone, SMS, organizer, web and corporate data retrieval will be available to consumers, quad-band support will allow for domestic and international roaming on all GSM/GPRS 850/900/1800/1900 MHz frequencies. It only has 32 MB flash memory and 4 SRAM, hopefully RIM will add some type of MMC or SD expansion slot soon. It also has a nice bright 65k colour screen. O2 in Europe announced the availability of the 7290 last month.


Rogers Wireless and RIM Introduce the New BlackBerry 7290 in Canada

Toronto and Waterloo, ON – Rogers Wireless and Research In Motion (RIM) today introduced the new BlackBerry 7290 Wireless Handheld in Canada. The Java-based BlackBerry 7290 builds upon the proven BlackBerry experience with new features including a quad-band phone, Bluetooth support, a brighter color screen and increased memory – all while maintaining excellent battery life. The BlackBerry 7290 is ideal for mobile professionals who want a superior wireless e-mail and data experience combined with a built-in ‘world phone’ phone, all in a single, compact device. Expected to be available at the end of the month, the BlackBerry 7290 operates on the nationwide Rogers Wireless GSM/GRS network with extensive support for international roaming.

“Rogers Wireless and RIM enjoy a long and successful history of delivering BlackBerry to customers in Canada and we are pleased to jointly introduce an exciting new BlackBerry device to Canadian mobile professionals,” said Mark Guibert, Vice President, Corporate Marketing at Research In Motion. “The BlackBerry 7290 raises the bar for advanced wireless devices, providing a powerful wireless voice and data solution to keep mobile professionals connected to the communications and information that matter most while on the go.”