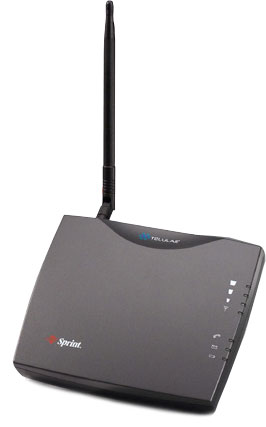 Sprint this week began testing the Telular Phonecell SX5T CDMA2000 1X fixed wireless terminal. The SX5T is plugged into your standard RJ-11 telephone jack, it then connects you to the wireless network allowing you to use your mobile phone service instead of the landline service in your home. No price is decided on the terminal, Sprint only sent out 2000 of these in five cities for trial.

“Sprint is our first customer for the Phonecell SX5T terminal,” said Ken Millard, chairman, president and CEO of Telular. “We have worked closely with Sprint in defining and developing a product with the right feature set to address fixed telephone service in the home using the wireless network.”

The Phonecell terminal will be available during the market trial through Sprint wireless retail stores in selected markets, including Charlotte, Indianapolis, Minneapolis, Richmond and San Antonio.

“Wireless number portability and improved wireless network quality are encouraging many consumers to replace their landline service with wireless service in order to cut their phone costs and simplify billing,” added Millard. “The Phonecell SX5T makes this possible.”

Telular did not disclose the terms of the contract.