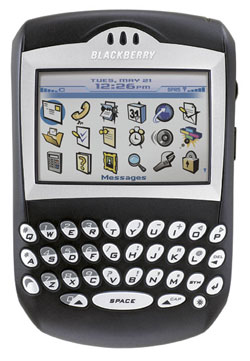 RIM has shown their new BlackBerry 7270 for 802.11b networks at the Garnet ITXPO Symposium today. The 7270, available sometime next year, will be the first handheld to feature VoIP and WLAN support. The VoIP feature can be used via an existing corporate or government PBX system for always-on access to email, intranet, Internet and organizer applications.

Research In Motion is demonstrating a new BlackBerry Wireless Handheld today at the Gartner ITXPO Symposium (booth #515) that operates on 802.11b networks and incorporates both voice and data capabilities. The BlackBerry 7270 will be the first BlackBerry handheld to feature VoIP and WLAN support.

The new handheld is expected to be commercially available early next year, but RIM has been testing functional prototypes internally and will begin external customer trials with select organizations starting next month. The BlackBerry 7270 will operate in conjunction with RIM’s new BlackBerry Enterprise Server v4.0 providing a robust platform for customers and ISV’s to extend enterprise applications and workflow enhancements to millions of workers whose jobs require on-premises mobility.

Together, the BlackBerry 7270 and BlackBerry Enterprise Server v4.0 provide a breakthrough solution for on-premises workers that can benefit from an all-in-one mobile device for phone, intranet and email:

VoWLAN – The BlackBerry 7270 supports VoIP telephony that essentially extends desktop phone functionality to a BlackBerry wireless handheld allowing the user to place and receive calls on the go. It utilizes SIP-based call control to deliver standards-based interoperability with IP PBX and traditional corporate telephony equipment. With the BlackBerry 7270, employees can perform their job with greater flexibility and efficiency through improved communications.

“We are extending the key benefits and differentiators of the BlackBerry wireless platform to WLAN networks and enhancing on-premises mobility for our enterprise customers. The inherent advantages of the BlackBerry platform such as security, back-end integration, manageability, ease-of-use, power management and push technology will provide a uniquely strong foundation for customers that want an integrated wireless VoIP and data solution,” said Mike Lazaridis, President and Co-CEO at RIM. “A growing number of customers already have WLAN coverage throughout their organization and a large majority of our BlackBerry Enterprise Server customers are deploying or testing WLAN networks. As such, we believe this is an excellent opportunity to widen the productivity and workflow benefits of BlackBerry inside organizations while maintaining a common architecture and infrastructure on the back-end for both local and wide-area wireless networks.”

The BlackBerry 7270 provides on-premises workers with the capability to stay connected when they’re away from their desk (wherever their organization has deployed WLAN coverage). Corporate and government organizations can provide users with the flexibility of a wireless VoIP phone that is tied into their existing PBX telephony together with always-on access to email, intranet, Internet and organizer applications.

This new BlackBerry solution for WLAN networks will support a wide variety of industries and environments including manufacturing, retail, hospitality, education and healthcare.

Further details on the new BlackBerry 7270 and general availability will be announced at a later date.