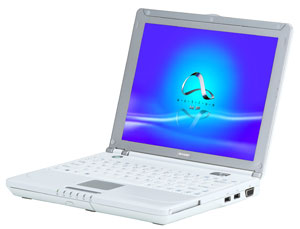 The Sharp Actius MP30 is the successor to the Actius MM20 ultraportable notebook, with a Transmeta Efficeon 1.6 GHz TM8800 processor, 512MB DDR RAM, ATI RADEON 7500 and CDRW/DVD combo drive. The system comes with Windows XP SP2 installed, and No Execute (NX) virus protection, thanks to the folks at Transmetta. The MP30 is available immediately for $1899 and has a mini 10.4-inch XGA LCD (1024 x 768).

Sharp Systems of America today introduced the successor of the Award-winning Actius MM20 notebook computer, the stylish and performance-enhanced Actius MP30. Building on the success of the very popular Actius MM20, Sharp has introduced the newest ultraportable notebook in the Actius notebook family. Continuing the award-winning value of the MM20 (“Best Buy” Award, Laptop Magazine, April 2004), the thin and light Actius MP30 adds built-in multimedia capability to Sharp’s ultraportable form factor. Ideal as a supplemental system for frequent travelers, or as a stand-alone machine for highly mobile individuals, the ultraportable MP30 provides users with a notebook that blends productivity and leisure in a compact package.

“With the Actius MP30, Sharp strikes a balance between ‘lean-forward’ power computing, and ‘lean-backward’ leisure computing,” said Mark Romano, Director of Product Planning for Sharp Systems of America. “A traveler who just put the finishing touches on the big report can pop in a DVD and spend the rest of the flight enjoying a movie, or listening to music without hassling with external drives or bulky wiring. And thanks to the innovation of Sharp’s engineers, the Actius MP30 is faster, thinner, lighter and less expensive than most of our closest competitors.”

“The innovation inherent in Sharp’s ultraportable notebook designs is making both business and consumer users sit up and take notice,” said Arthur Swift, President and Chief Executive Officer of Transmeta. “The Actius MP30, with its tremendous multimedia capability, showcases the outstanding performance and energy efficiency inherent in Efficeon.”

In addition to its efficient computing power, the Transmeta Efficeon TM8800 is equipped with No Execute (NX) virus protection, which takes advantage of advancements in the release of Microsoft Windows XP Service Pack 2 (SP2), providing extra security at the platform level. This added level of protection gives users a first line of defense against certain malicious viruses, adding improved integrity of the user’s home or office network.

“With a travel notebook users may find themselves outside of the protection of a corporate or home-based firewall as they connect to the open networks of hotels and coffee-shops,” notes Romano. “This is like ‘running with scissors.’ The platform-level protection that the Transmeta Efficeon TM8800 offers, provides users with a key ally against a computing environment rife with rogue malicious code.”

Strutting its stuff with a clean, white stylish design, the Actius MP30 steps lightly on the scale at only 2.8 lbs and flaunts a thin profile that is just over an inch-thick. The sleek yet powerful Sharp Actius MP30 notebook computer is designed for highly mobile users who don’t want to sacrifice a multimedia drive in an ultraportable computer, but demand performance and reliability. The Actius MP30 delivers on these demands by providing a thin-and-light computer with a high performance CPU and 32MB graphic accelerator (ATI Mobility RADEON 7500), and includes a built in CD-RW/DVD combo drive. The unit is powered with standard memory of 512MB DDR RAM, and can be expanded to 1GB of memory.

Equipped for wireless connectivity via integrated 802.11g Wi-Fi (supporting Atheros Super G Mode), the Actius MP30 notebook provides users with a lightweight, wirelessly enabled notebook that serves as a stand-alone computer, or as an adjunct to a main desktop machine through the functionality of DirectHD technology. By connecting via USB 2.0, users are able to take advantage of DirectHD technology, which allows the Actius MM20 to be accessed as an external USB drive. Users are able to then transfer files back and forth at will, providing them with data mobility that competing notebooks can’t match without the hassle of network settings.

The Actius MP30 also features a plug-in remote control for multimedia and AV control as well as other applications that can be set-up by the user. The finger-sized, plug in remote control, attached to a pair of ear-bud headphones, allows users to easily operate multimedia functions and can also be used for advancing through presentations and scrolling through word processing and other popular applications. Additionally, the Actius MP30 acts as an instant multimedia player thanks to the built-in Instant Play feature, which allows users to quickly start and play DVD videos and/or music CDs at the touch of a button, without having to fully boot up the machine.

As an added enhancement to the 4.6-hour life for the Actius MP30 battery, Sharp has included a ‘Mobile Mode Switch,’ which provides users with an energy saving option. When in use, ‘Mobile Mode’ decreases the brightness of the display and the frequency of the processor to extend the life of the battery when a user might need it most.

The Sharp Actius MP30 is competitively priced with an estimated street price of $1899.00. It is available to order immediately through Sharp directly (http://store.sharpsystems.com), or through Sharp’s network of retail partners and reseller channels. For more information, call 800-BE-SHARP.