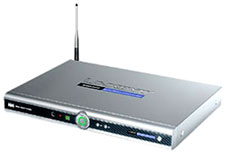 An online retailer took the wraps off the new Linksys Wireless A/G Media Center Extender a bit early last week. Today Linksys has officially announced its release. The WMCE54AG connects to wireless-a, wireless-g or wired Ethernet to share digital movies, TV shows, pictures or music on their Windows Media Center PC. A remote control allows you to control the menus on TV to easily find what you are looking for. It will be available towards the end of October for $300 USD.

Using a Wireless-A, Wireless-G, or wired Ethernet connection, the Media Center Extender streams homemade or downloaded premium movies and digital photos stored on a Windows Media Center PC to TVs around the home for the whole family to enjoy. A digital music collection or Internet radio station can play in full glory through a stereo system, freed from those little computer speakers. Users can also watch and pause live TV shows or record them digitally for viewing later.

The Media Center Extender sits by a home stereo and television and connects to them using standard consumer electronic cables such as RCA connectors. It then communicates with the Media Center PC via a home network using Wireless-A or Wireless-G networking or if users prefer, it can be connected by use of 10/100 Ethernet cabling. Using the remote control and the user-friendly menus on your TV, users can quickly find the digital movies, TV shows, pictures or music on their Windows Media Center PC. Users can even chat with friends through Microsoft Windows Messenger while watching movies on the same screen.

“Windows XP Media Center Edition 2005 harnesses the power of the PC to enable consumers to enjoy their digital photos, music, videos and recorded TV like never before,” said Will Poole, senior vice president of the Windows Client Business Group. “Microsoft’s vision for creating and enjoying digital entertainment in the home is further enhanced through the innovation of companies such as Linksys which offers customers the freedom and flexibility to extend their digital entertainment anywhere throughout the home.”

In the latest home networking report by market research firm In-Stat/MDR, titled Digital Domicile 2004: Home Networking Hits the Big Time said, ” … the continued need for broadband sharing and a growing interest in entertainment networking will drive the total value of equipment with a home networking connection of some type from $8.3 billion in 2004 to $17.1 billion by 2008. The emergence of media networking continues to be the most exciting part of the home networking market. We expect Microsoft’s Media Center Extender technology to accelerate this trend going forward into 2005.”

“Moving media content around the home is becoming a popular application for wireless networks,” said Mike Wagner, Linksys director of world wide marketing. “Working closely with Microsoft, we are now able to stream premium content over the network so consumers can take their digital content from the PC and enjoy it in the comfort of their living room where the whole family can share the experience.”

What users can do with the new Wireless A/G Media Center Extender:

* Watch home or downloaded digital movies and browse digital pictures on a television.

* Comes equipped with a free on screen program guide that tells users what is on TV.

* Listen to digital music collection and Internet Radio through your stereo system.

* Select entertainment from on-screen menus with the easy-to-use remote control.

* One user can watch a recorded TV show in the family room while at the same time another can browse through the family’s digital photo collection on the Media Center PC in the den.

For the Media Center Extender to work, users must have the following two items:

The Media Center Extender works with the new Linksys Wireless A+G products launched on Sept 29. Utilizing the wireless A and wireless G radios will help provide users with the bandwidth they need to perform the applications they would like, such as streaming video, gaming, broadband sharing, printing, chat, file sharing, VoIP and much more.

The Linksys Wireless A/G Media Center Extender (WMCE54G) will be available through major US and Canadian retail, online retailers, distributors, director response and value added resellers for an estimated street price of $299 by end of October. The media extender is planned to be available in Europe, Asia and other countries where Linksys products are distributed sometime next year.