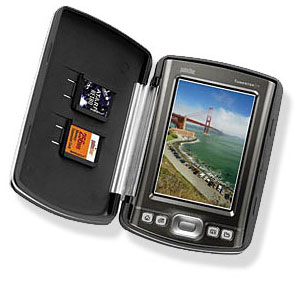 PalmOne has released the first handheld PDA with 256MB of flash memory, for some reason i’m not too excited. For the last couple years handhelds have been inching their way up the memory ladder. I think they started with 8MB, then went up to 16MB, then 32MB, eventually 64MB was a breakthrough. I guess we should be happy we have 256MB storage now, maybe by 2006 we can see a 1GB (or more) version, which technically, could be available right now if it weren’t for the ultimate consumer marketing plan. However, it is competitively priced at only $399 and should keep those fancy powerpoint presentations from lagging. 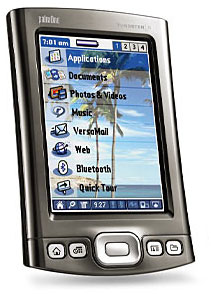 MILPITAS, California — Nearly doubling the industry’s current handheld storage maximum, palmOne, Inc. today introduced the Tungsten T5 handheld with 256MB of flash memory. The Tungsten T5 gives productivity-minded mobile professionals the ability to carry more data and applications than ever before on a handheld, for an estimated U.S. street price of $399.

The Tungsten T5 handheld’s flash memory protects information even if the device loses its charge, and doubles as a portable flash memory drive. With palmOne’s highest-resolution 320×480 color screen, Bluetooth wireless technology, and an all-new sleek and slim design, the Tungsten T5 rises above conventional handheld limitations, giving customers the folders and files they need whenever and wherever they need them.

“Today’s mobile professionals need greater access to their information, regardless of the data’s size,” said Ken Wirt, senior vice president of worldwide marketing for palmOne. “The Tungsten T5 handheld gives these highly mobile workers more storage capacity than any other handheld device. It also doubles as a flash drive, allowing people to carry their work from the office to home and back, without carrying a laptop.”

Flash memory, a form of electronic memory, is used for easy and safe information storage. Its low power consumption and light weight make flash memory ideal for mobile devices. In addition, flash memory holds information without a charge or power, just like a memory card saves pictures when not connected to a digital camera. The flash memory in the TungstenT5 handheld will maintain its data, even when the power is exhausted. Simply charge the handheld again and the data is there.

With 256MB of flash storage, the greatest amount of memory currently available on the handheld market, the Tungsten T5 handheld can store all of the following:

With the ability to carry so many files, folders and documents anytime, anywhere, users can stay connected and get more done while at the office, at home or on the road.

Users can drag and drop files and folders between the Tungsten T5 handheld and their desktop computers using palmOne’s new File Transfer application, which is installed onto computers via Palm Desktop software. Simple and easy to use, a live desktop window gives users instant access to data and information stored in the handheld’s internal drive. Users who have Palm Desktop installed at work and home can simply drag an important file to their internal drive, take their Tungsten T5 handheld home, plug it into their home computer’s USB port and access the file. While on the go and away from a desktop, users can view their Word, Excel or PowerPoint documents on palmOne’s highest-resolution color screen.

The Tungsten T5 also doubles as a flash drive, making data stored on the device easily accessible on the go. To access important information wherever it’s necessary, the user simply selects Drive Mode on the handheld and plugs the HotSync cable into another computer’s USB port. The user then can open, copy, move, rename, delete and manage files and folders while using the Tungsten T5 handheld as a removable drive.

Strong support from DataViz Documents To Go 7.0 gives users the ability to create and edit Word and Excel compatible files and view and carry PowerPoint files with no desktop conversion required. Multimedia content, such as photos, music and videos, also can be stored in the Tungsten T5 handheld’s ample internal memory. A new Favorites view provides easy access to the applications, files and folders most important to the user, while a new Files application allows for easy navigation among folders and files.

Documents, PowerPoint presentations, photos and even videos can be viewed in landscape or portrait mode on the Tungsten T5 handheld’s stunning 320×480 display. A robust Intel 416MHz XScale processor provides plenty of power, and the built-in Bluetooth wireless technology lets users sync with a laptop computer or connect to a Bluetooth compatible phone to browse the web and get email. With its slim and sleek design, the Tungsten T5 fits easily into a loose pocket and features the Multi-connector, a new common connector for palmOne products.

Being introduced with the Tungsten T5 handheld is a host of new accessories, including the following (all prices are estimated U.S. street price):

— Tungsten T5 USB Cradle Base — This new stylishly designed HotSync and charging cradle works with inbox cables and charger and includes an audio out for stereo or powered speakers. $29.99