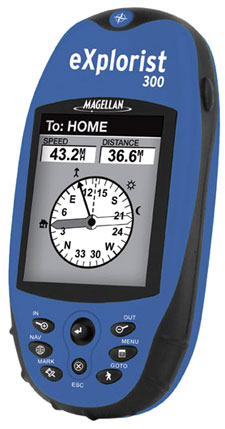 Thales Navigation has just released the Magellan eXplorist 300 to North America. The $199 three-meter accurate GPS offers a built-in nationwide background map, an electronic compass, altimeter and barometer. It’s not a bad deal considering it can store 500 waypoints and five track-log files with 2000 points each. It measures 4.6 x 2.1 x 1.3-inches and weighs a mere 4 ounces.

“The product marks a milestone in the GPS industry by delivering a combination of premium navigation features at an affordable price,” said Christian Bubenheim, senior director of consumer product marketing for Thales’ navigation business. “The Magellan eXplorist 300 is an ideal, easy-to-use navigation tool for outdoor adventures, including camping, hiking, hunting, geocaching, and more. Its powerful feature set will satisfy even the most hard-core enthusiast, while its intuitive interface makes it simple even for beginners to use.”

The compact Magellan eXplorist 300 weighs less than 4 ounces, measures 4.6″ x 2.1″ x 1.3,” and has a rugged, rubber-armored, waterproof (IPX-7) exterior. Explorers can carry it anywhere with ease and use it in any weather condition. Navigation data is easy to see on the large 2.3″ diagonal, high-resolution LCD screen. It’s perfect for viewing the eXplorist’s built-in North American background maps, complete with interstate highways, major roads, parks, waterways, airports, and more. In addition – and unique to the Magellan eXplorist line – the electronic compass of the eXplorist 300 eliminates the need to move to get a bearing, while its electronic barometer and altimeter allow users to monitor the weather and climbing conditions, respectively.

The Magellan eXplorist 300 offers fast one-button access to its most-often-used features: the menu, personal points-of-interest storage, “go-to” routing, backlighting and track-log screens, which let navigators automatically see where they have been. The eXplorist 300 can store up to 500 waypoints and five track-log files, each with up to 2,000 points. Its accuracy is ensured via Magellan TrueFix technology, which incorporates a superior 14-parallel-channel, WAAS/EGNOS-enabled GPS receiver to provide precise position fixes within three meters plus advanced reliability and accuracy in satellite signal acquisition and tracking.