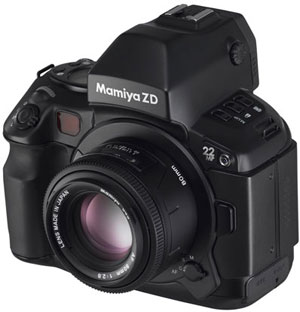 The first medium format digital SLR was announced today by Mamiya, the ZD system features a large 36 x 48 mm 22 megapixel sensor and will accept 645AF lenses. The camera will capture 12-bit colour images on either CompactFlash or SD cards, and can then be previewed on the 1.8-inch LCD display.

Mamiya also plans to release the ZD digital back, compatible with the Mamiya 645AFD & Mamiya RZ67Pro-IID, it will have the same specs as the above ZD system. No date or price is set yet, but Mamiya assures that their press release is based on their current plans and beliefs of Mamiya-OP Co., Ltd. and involves known and unknown potential risks and uncertainties. In other words, cross your fingers, it’s not easy to manufacture large sensors.

We are very proud to announce development of a lens-interchangeable digital SLR camera “Mamiya ZD” and a digital back “Mamiya ZD Back”. 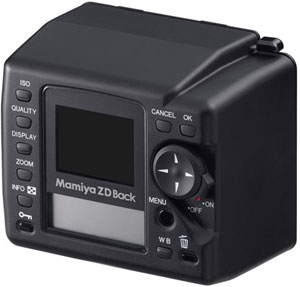 Since 1940, Mamiya has been pursuing to design and realize high images quality, high reliability and ease of use. Mamiya cameras ever produced have been well received by professional photographers and advanced amateurs, and that has made Mamiya the leader in high-end imaging. Inheriting the high quality, in order to meet the needs of digital photographers, the Mamiya ZD and Mamiya ZD Back are being created.

The Mamiya ZD Back realizes full interactive communications through the MSCE (Mamiya Serial Communication for External) to bring out the best of all the advanced functions of these cameras.

The Mamiya ZD and the Mamiya ZD Back come with a 36x48mm, 22 million-pixel CCD and generate stunning high resolution images with both rich and smooth tonal ranges. The 14 bit A/D (Analog to Digital) conversion records information as 12-bit per colour channel. The ASIC (Application Specific Integrated Circuit), which was developed exclusively for the Mamiya ZD and Mamiya ZD Back, processes in realtime, optimisation of image data from CCD.

With the built-in slots for media cards, the Mamiya ZD and the Mamiya ZD Back can be used without tether. Low-pass filter is optionally available and a photographer can shoot with or without it depending on shooting conditions. An innovative cartridge type low-pass filter makes it a snap to exchange the filters (Mamiya ZD only). For these models Mamiya is developing “Mamiya Digital PhotoStudio” software which provides a simple, yet powerful interface from image capture & editing, to processing. When connected to a computer by an IEEE1394 cable, many functions of the cameras can be operated from computer.

Mamiya is committed to develop these new models and desires to bring them as soon as possible to you!

This press release is based on the current plans and beliefs of Mamiya-OP Co., Ltd. and involves known and unknown potential risks and uncertainties.