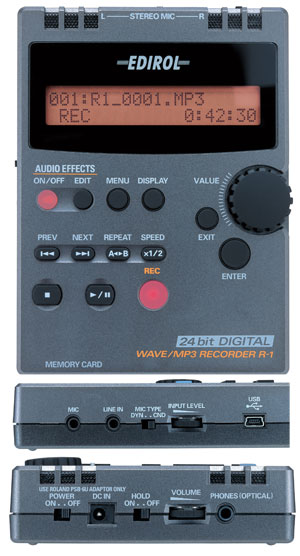 Edirol today announced the R-1, a portable 24-bit WAV and MP3 recording device with direct storage capabilities to Compact Flash memory. The R-1 will run off 2 AA batteries, it measures 4 x 5.5-inches and weighs about 10 ounces. At $550 USD the R-1 will probably only make sense to purchase at a professional level, at that price you would think they had some type of 1.8-inch harddrive, and why does it only handles a maximum 2GB CF card? But even still, with 2 GB you can record 69 hours of MP3 or 2 hours of 24-bit/44.1kHz WAVs.

For non-pros who would like to record audio, but do not require the extra features and hi-tech hardware, the Archos Gmini 400 has a 2.2-inch LCD display with 20GB of disk space. It also features CF and even SD slots and can record about 300 hours of MP3, it sells for $360 USD.

Edirol has announced the R-1, a portable 24-bit WAVE and MP3 Recorder/Player suitable for a wide range of sound and music applications.

The R-1 is a mobile, high-quality recording device offering direct storage to Compact Flash (CF) memory, 24- bit effect processing, and operation from 2 AA batteries. At 4″ x 5.5″ and weighing in at 10 oz (including batteries and CF), the R-1 is carefully designed with handpicked electronic parts chosen for premium sound quality throughout the signal path.

The R-1 stores files directly to Compact Flash allowing convenient access and memory capacity up to 2GB. It comes bundled with a 64MB CF card which allows a maximum record time of 130 (MP3, 64 kbps mode).

A 2GB CF card will provide storage capacity for over 2 hours of 24-bit/44.1kHz WAV recordings or over 69 hours of MP3 storage at the R-1’s highest compression level of 64kbs. The R-1 also offers a USB2.0 port to quickly transfer files to and from the computer. At maximum resolution (24-bit/44.1kHz) the R-1 can transfer a 60 minute file (908 MB) to the computer in just three minutes. The R-1 includes a headphone jack that doubles as a S/PDIF Optical output, allowing the R-1 to stream digital audio directly to digital monitor speakers, such as the Edirol MA-10D or MA-20D or DAT/CD/MD recorders.

According to Kim Nunney, President of Edirol Corporation North America, “Hard drive and memory-based portable audio players are hugely popular. In the case of recorders, however, very few quality lower-cost options exists leaving legacy media devices like cassette, DAT, or MD as your choices. The R-1 was designed to satisfy the needs of musicians, field recorders and videomakers. This user group needs portability beyond laptops with high quality sound, lengthy recording times and random access.”

The R-1 will list for $550 and be available in later November.