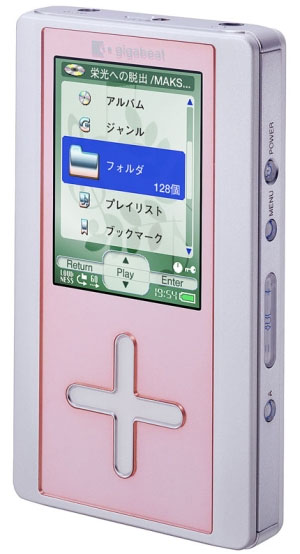 Toshiba has made another attempt to destroy the ultimate iPod today, they announced that the gigabeat F series 1.8-inch hard drive based music players will be available in 10, 20 and 60GB versions this November in Japan. If Toshiba wants to grasp the market, they will have to do a better job on pricing, the F10 and F20 will run you around $350-$450, the F60 will go for $575. Sure it has a 2.2-inch QVGA colour LCD, but I mean at that price, you could throw in some video out with divx and mpeg4 support, and how about some of that CF slot action?

Toshiba Corporation today reinforced its line-up of gigabeat personal HDD audio players with the launch of the “gigabeat F” series. Designed to deliver enhanced usability, including a high-resolution color display, and a comprehensive range of storage capacities, including the world’s first 60-gigabyte capacity on a 1.8-inch hard disk drive, the gigabeat F series takes portable digital music to a new level of personal listening pleasure.

The attractions of gigabeat F models begin with a slim portrait-shaped case that fits comfortably into the hand. Advanced navigation and control functions are managed by an integrated plus-sign shaped touch sensor and displayed on a 2.2-inch QVGA color LCD panel. All three models in the series integrate a 1.8-inch HDD, with capacities of 10GB, 20GB and 60GB. The gigabeat F series will be launched in the Japanese market at the end of November 2004.

Toshiba’s gigabeat HDD audio players are small enough to slip into a shirt pocket but large enough to carry a library of songs and to provide music for all moods and occasions. The new 10GB model has the capacity to store some 2,500 four-minute pieces of music recorded at 128kbps in the WMA or MP3 formats, while the 20GB model and flagship 60GB model have approximate capacities of 5,000 and 15,000 pieces of music, respectively.

“The Japanese market for HDD audio players is expected to reach 950,000 units in fiscal year 2005,” said Takeshi Hagio, Vice President of Digital Camera & Imaging System Division of Toshiba’s Digital Media Network Company. “With our new gigabeat players we want to stimulate further growth and demand by delivering versatile players that offer excellent functions and features that are intuitive and easy to use. Our goal is to bring more listening pleasure to people’s lives.”

The new models in the gigabeat F series offer advanced management and navigation through on-screen management software, and “Plus Touch,” a plus-sign shaped touch sensor that carries out all main operations, including music searches and playback volume changes, with a slide of the finger. “Plus Touch” also supports smooth, high speed scrolling through music lists. These control function are enhanced by display of all control actions and selections on 2.2-inch QVGA low-temperature polysilicon TFT LCD.

The “gigabeat Room” software provided with gigabeat F series players takes one-touch downloads from a CD to the music player off user wish lists and makes it a reality. Simply insert a gigabeat F series player into its supplied cradle, hook up the cradle to the USB port on a PC, insert a CD into the PC’s optical drive, and then press the “RipRec” button built into the cradle. This launches “gigabeat Room” on the PC, which automatically transfers the CD content to the PC and then on to the gigabeat. Synchronizing specific music folders in the PC with a gigabeat is also easily done by specifying the folders to synchronize in “gigabeat Room” and then pressing the “Sync” button on the cradle.

“gigabeat Room” is newly developed software proprietary to Toshiba, expressly designed to create an optimized user environment for music entertainment. It can playback CD or music files on PC, rip from a CD, use Gracenote, Inc.’s CDDB to display information on albums and music, and transfer music files to and from gigabeat players. “gigabeat Room”’s “RipRec” functions allow people unfamiliar with PCs to enjoy gigabeat’s wide-ranging functionality to the full. Transferred music files are automatically stored in a database that can be searched by artist, album or musical genre, and JPEG images can be attached to albums, and even to individual songs, providing visual cues during music searches. Music files that are transferred by “gigabeat Room” or Windows Media Player 9 are encrypted as they are recorded to the gigabeat.

The gigabeat F series combines good looks with a superb performance, including integration of SRS WOW from SRS Labs, for rich stereo sound that clearly brings out each instrument. A selection of 28 equalizers enhances listening pleasure across the spectrum of music, from classical to jazz and from acoustic to rock and hip-hop, and in the gigabeat F series users can preset equalizer preferences each individual piece of music.

Player performance is rounded out by a built-in lithium-ion battery that provides up to 11 hours of continuous play.

Music downloads from a PC are fast and simple via a USB 2.0 connection that delivers a CD’s worth of music files in only 30 seconds. And that is not all. Connection to the USB port can be used to charge gigabeat’s battery, and an optional recharging stand (included for the gigabeat F60) has a USB port and can function as a host server. Equipped with an optional Toshiba-approved USB-type wireless or wired LAN adapter, the stand can connect a gigabeat player to a network as a virtual HDD, allowing music and data downloads from multiple PCs.

All the new gigabeat models are bundled with software for “Windows Media DRM,” Microsoft’s digital rights management system for secure downloads of content with no breach of copyright protection. This allows on-line purchases and downloads of music from on-line stores supporting Windows Media DRM sites.