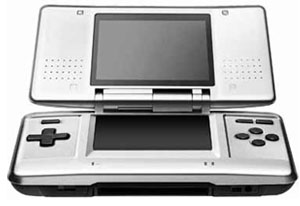 Nintendo announced the release of the Nintendo DS portable game system on November 21st for $149, some retailers are already taking pre-orders for the much-anticipated dual screen console system. Sony is not worried about the DS launch, they still plan to release the PlayStation Portable (PSP) system by March 2005.

“We expect PSP to create a new market, helping expand the entire game market. But (direct competition is unlikely as) PSP and the DS will probably have different roles in the market.” said Ken Kutaragi, president of Sony Computer Entertaiment Inc.