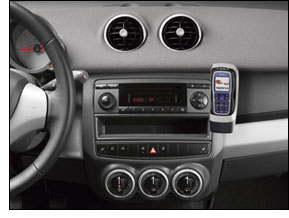 The CR-21 Nokia Mobile Holders are the next generation in automobile phone holding technology, according to Nokia. It does have some handy features, if you push the phone down, it is simply released from the holder, and it has slim design available in several two-tone colours. I just keep my phone in the overhead visor strap from my CD wallet, it’s not two-tone, but it does the job.

“With the new generation of Nokia mobile holders, we consider design to be every bit as important as function, because many users now like their vehicle’s interior fittings to be appealing,” says Uwe Pertz General Manager Consumer Products, Nokia Smart Traffic Products. “That’s why design plays an increasingly important role when people buy a mobile holder. At the same time, many customers want the mobile holder to provide a good visual match with compatible mobile phones and to harmonise with the rest of the vehicle interior. The new Nokia Mobile Holder CR-21 is a good example, as it has been ideally adapted to match the design of the compatible Nokia 3220 mobile phone.”

The new Nokia mobile holder CR-21 is expected to be available in Europe from late 2004, and subsequently in Asia and the USA.