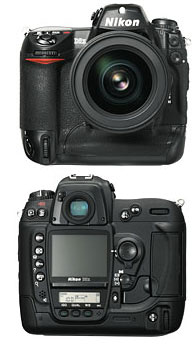 Nikon today unveiled the D2X Professional series digital SLR with 12.4 megapixel DX CMOS processor. This new beast is what all pros have been waiting for, it will shoot at 5 fps at full 12.4 megapixels, but then can be adjusted down with FOV crop to 6.8 megapixels and capture at 8 fps.

As I was hoping for with the announcement of Nikon’s adoption of PTP/IP protocol, the D2X will include the new WT-2 wireless transmitter capable of supporting both 802.11b and g via wireless Capture Control software. One of the most amazing features I think is GPS support for location-based recording, included with the shooting-data, latitude, longitude and altitude can be transferred from a GPS device to the D2X via the optional MC-35 cable.

Also the Advanced 3D-Color Matrix Metering II is designed to prevent highlight portions from being washed out of an image, this happens a lot with DSLR, it will also enhance shadow portions.

MELVILLE, NY -– Nikon, the world leader in photography, today announced the new D2X professional digital SLR camera. Designed as a truly versatile workhorse camera for many professional disciplines, the D2X blends for the first time the high levels of resolution commercial clients demand with superb image quality, color consistency and class-leading speed. The D2X delivers high image quality using brand new innovations that produce ultra sharp images with very fine gradations and smooth color transitions across the color range – all while maintaining impeccable color accuracy, even when shooting under rapidly changing light. High resolution is achieved by an all-new 12.4 million pixel DX Format CMOS image sensor and a new image processing engine that works seamlessly with optimized systems throughout the camera. Even with this tremendous resolution, the D2X can comfortably shoot full resolution images at 5 frames per second (up to 21 consecutive JPEGS and 15 NEFs). When the situation demands yet faster frame rates, the D2X has a unique 6.8 megapixel ‘High Speed Cropped Image’ mode that boosts the shooting rate to 8 frames per second, up to 35 consecutive JPEGs or 26 NEF images, by cropping the number of pixels used on the sensor to create the image.

The D2X proves to be the only digital SLR camera truly equipped to meet the changing landscape of professional photography. Not only does it successfully combine high resolution, speed and quality, but it also introduces exclusive technologies that promise to expand the realm of digital photography. Options such as the newly introduced WT-2A Wi-Fi transmitter achieves full wireless remote camera control and transmission, while the revolutionary i-TTL Speedlight technology included in the D2X ensures radical new possibilities in creative lighting. 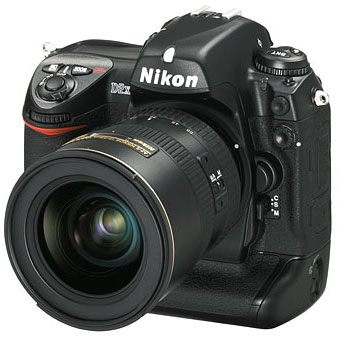 “Today’s working professional photographers have to be more versatile than ever, and with the introduction of the D2X Nikon now offers pro photographers the highest levels of quality, features and resolution to respond to their ever-changing needs,” said Jerry Grossman, vice president, marketing for Nikon inc. “While the 12.4 megapixel resolution of the D2X addresses a critical issue for photographers, other features such as improved color resolution, the high speed crop mode and affordability make the D2X the most versatile and powerful camera available for professionals.”

With an all new, high performance 12.4 megapixel DX Format CMOS sensor, the D2X delivers the high resolution and sharp detail needed for professional results. However, a high resolution sensor is only part of the equation in delivering the ultimate image quality. The D2X employs Nikon’s new generation system LSI that greatly improves the precision of processing during the analog/digital conversion. After digital conversion, a new processing method has been added to increase image-processing precision in the ASIC for smoother display of tones from highlight portions to shadow portions of the image. With optimized distribution of analog and digital white balance gain, the new engine produces smoother gradations with consistent and smooth transitions, all with exceptionally pure color rendition.

In addition to two new Adobe RGB color modes that further expand professional color space options with the new engine, the D2X also supports the sYCC color profile found in many of the latest printers. With sYCC support, photographers can produces JPEG files with a gamut wider than sRGB and fully exploit the output capabilities of their latest color printers.

Professionals need their cameras to be as fast as they are. Therefore, similar to the blazing fast D2H, the D2X adopts a holistic approach to speed. The camera is ready to shoot the instant it is turned on and has an almost imperceptible 37ms shutter lag time, an astounding achievement at this resolution level. Using a new high-speed 4-channel output method, and improved speed of transferring image data from the image sensor to a memory card, the D2X is capable of shooting 5 frames per second at full 12.4 megapixel resolution for up to 21 JPEGs or 15 NEFs. The camera’s unique High Speed Cropped Image mode allows photographers to achieve an even higher continuous shooting rate of 8 frames per second by using a dual area sensor that records only 6.8 million pixels in the center of the sensor. While photographers are satisfied with 5 frames per second for most applications, this new mode gives them the duality of having the option to shoot at faster framing rates for specific situations, within one camera body.

The D2X also boasts Nikon’s acclaimed Mutli-CAM2000 high-speed AF system that features eleven autofocus sensors of which nine are cross type and placed in the rule of thirds layout.

The D2X is consistent with the D2H in terms of body design, ergonomics and interface. The camera’s large controls and buttons are positioned for intuitive control that frees the photographer to concentrate on the composition. Regardless of the camera’s orientation, operation remains consistently comfortable and with virtually the same access to primary controls. The D2X features an improved energy efficient design that when combined with its unrivaled lithium-ion battery system, delivers extended longevity and high energy capacity capable of approx. 2,000 shots per charge, with accurate real-time system status displays. A new 2.5-inch, 235,000 pixel high resolution LCD monitor features an all-digital interface for clear, flicker-free display of preview images and logically organized Shooting, Playback, Set-up and Custom Settings menus. On-demand information includes an improved histogram and new RGB Histogram displays, as well as a chronological ‘History Menu’ that lists recently accessed settings.

Nikon’s Total Imaging System is unrivaled in innovation and offers photographers the most cutting edge new technologies and features to incorporate in their workflow. Outlined below are groundbreaking technologies that enable photographers to achieve results not possible with any other system:

Nikon’s Wireless Transmitter WT-1A for the D2H opened new roads in digital SLR photography by making it possible to transmit images directly from the camera over a wireless LAN. Now, the new Wireless Transmitter WT-2A will open the floodgates of creativity for photographers by allowing them to not only transmit images over a Wi-Fi network, but also allow wireless remote control of the D2X over a Wi-Fi network from a computer running Capture 4.2 software. Photographers can set the D2X in places that may be inaccessible or unsuitable for photographers, and wirelessly adjust settings, trigger the camera, and instantly retrieve the images over a LAN. The applications of this technology are promising and limitless. The new IEEE802.11b/g compatible Wireless Transmitter WT-2A also provides faster image transmission with improved security and compatibility with the latest protocols.

First debuted with Nikon’s D2H digital SLR camera, Nikon’s i-TTL speedlight technology is arguably the most robust and advanced speedlight system in the world, and holds limitless possibilities for all kinds of photographers using creative lighting. i-TTL technology in the D2X allows photographers to wirelessly control in full TTL, up to 3 groups of Speedlights, with any number of individual speedlights in each group. Photographers can relinquish all cords and cables or the need to ever calculate flash and distance ratios, because the i-TTL systems is capable of making all exposure calculations in real time, wirelessly, during the exposure to deliver a perfect flash exposure in any situation. Photographers can even maintain full control of each group of speedlights from a master, on-camera Speedlight, by dialing up or down flash exposure values for each group. This technology can potentially distill an entire portrait lighting system into a small set of multiple SB800 and SB600 Speedlights.

The D2X will be bundled with Nikon’s PictureProject software, an intuitive software application that provides image transfer, image organization, simple image editing (NEF plug-in included), and print layout functions. The D2X is also compatible with Nikon Capture 4.2 software (optional), that features improved functions as well as Nikon Capture Camera Control that can now be used to control the camera from a computer over a USB connection or a wireless LAN (requires WT-2A).