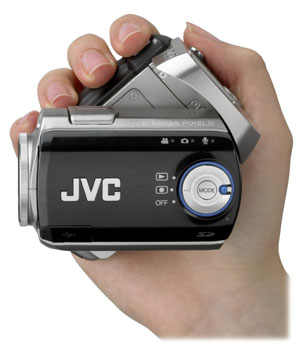 JVC has come out with a new duo of digital camcorders this week. The JVC Everio GZ-MC200 and the Everio GZ-MC100 both support dvd-quality MPEG2 video recording at 1600×1200 UXGA, and can capture 60 minutes of video directly to a 4GB CompactFlash micro-drive. The camcorders also feature a 2.12 megapixel CCD for capturing 1600 x 1200 digital stills, these can be recorded to an alternate SD memory card. Unfortunately both camcorders seem to be priced high, the GZ-MC200 will run for $1,299.95 and the GZ-MC100 for $100 less. See press release below.

“Video products have recently begun to adopt new types of digital media, a trend that began in audio,” observed Dave Owen, General Manager, Video Division, JVC Company of America. “But with Everio, JVC establishes a new benchmark with a format that combines convenience with the high storage capacity required to meet real world needs. The result is a pair of ultra-compact camcorders that offer video and still image capabilities, mobility, high image quality, extended shooting time, and ease of use.” Everio comes in two styles, the GZ-MC200 with a rotating grip and the vertical GZ-MC100 that’s about the size of an electric razor. Both cameras offer the same high performance and features, while offering two design alternatives to suit users’ personal preferences. Advanced Technology for Optimum Video and Still Quality Both Everio models feature a 1/3.6″ 2.12 megapixel CCD having a total of 2.12 million pixels (effective: 1.23 million for moving pictures, 2 million for still pictures) to offer the high resolution capabilities needed for high quality digital videography and photography. To fully utilize the 2.12 megapixel CCD’s picture performance, the cameras use JVC’s Megabrid Imaging Engine that separately processes video and still signals, providing optimal processing for each. Megabrid technology assures high sensitivity and a high signal-to-noise ratio for moving pictures and clear, high resolution progressive still images. The GZ-MC200 and GZ-MC100 also feature a Super Hi-Resolution Lens specifically matched for 2.12 megapixel CCD performance. This newly developed 9-group 11-element structured lens, which offers a high-precision 10x optical zoom, includes a glass-molded aspherical lens for the best possible picture quality. There is also a 200x digital zoom. MPEG-2 High Quality Video Clips In the video camera mode both Everio models shoot up to 60 minutes of high quality MPEG-2 video clips(1) on the supplied 4GB Microdrive card. A choice of four recording modes lets users choose between more shooting time or higher quality, depending on their needs. The highest quality Ultra Fine mode records at a fixed data rate of 8.88 Mbps including AC 3 audio — comparable to the DVD (average 4 Mbps video/9.8 Mbps maximum) data rate — for essentially DVD-level quality in the same video and audio format as a movie DVD. As a result, Everio images can be enjoyed on a large screen display, including plasma, LCD and rear projection TVs, without the quality loss suffered by other formats when presented on a large display. A convenient multi-connector AV/S-Video cable is included for direct connection. Up to UXGA Size Digital Still Images The digital still camera mode shoots JPEG digital stills at up to UXGA (1600 x 1200 pixels) size, for excellent quality even for large A4 or 8×10 inch size prints. Users select picture quality and image size to match their needs, whether for printing, documents or e-mail. With the Microdrive’s large storage capacity, thousands of pictures can be shot. Multiple Advanced Interfaces The cameras store images and video on the standard 4GB Microdrive card. The same CF slot can accommodate user supplied CompactFlash cards. There is a separate SD Memory Card slot3. Microdrive is a hard disk drive that’s the same size as a CompactFlash card, but with much greater capacity. It can be removed, just like a CompactFlash or SD Memory Card, and data loaded into a PC using an optional card adapter. For quick downloading to a PC, simply connect the camera via its USB2.0/1.1 interface. All transfer is digital-to-digital, so there is no quality lost in the process. And since the cameras support PictBridge, the camera can be connected via the USB terminal to a compatible printer to easily print stills directly from the camera. Also, DPOF (Digital Print Order Format) support allows the menus on the camera screen to be used to conveniently select images and quantity before giving removable media to a printing service. Both the GZ-MC100 and the GZ-MC200 will be available in October at nationally advertised values of $1,199.95 and $1,299.95, respectively.