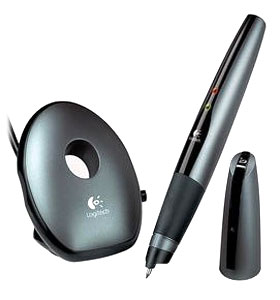 Logitech io2 Digital Writing System is a slim digital pen that can easily capture and manage critical information. Whatever notes or pictures that you draw will be instantly digitized and archived once you dock the io2 pen. The 8.5 x 11-inch digital paper enables the pen to capture your writing through a pattern of tiny dots that are pre-printed onto each sheet, these create a light screen effect.

The Logitech io2 Digital Writing System features a refined, slimmer digital pen design — thanks to the shrinking of internal technology — along with more paper options and enhanced handwriting recognition that is now part of the core offering.

“The value of our digital writing system is in its ability to take a natural behavior — writing notes with pen and paper — and deliver the added benefit of automatically converting those notes into digital records,” said Chris Bull, general manager of Logitech’s Digital Writing group. “Our new, more elegant pen design fits comfortably in your hand like a premium pen. The updated software includes enhanced handwriting recognition. And with more paper options, our customers have the flexibility to take notes in the physical format they prefer. All of these improvements will make the experience better, and the end result more valuable.”

Based on the functionality developed by Swedish-based company Anoto, the Logitech io2 Digital Writing System is a versatile, complete offering to help today’s office worker capture and manage the flow of critical information. It’s easy to take notes at a meeting or draw pictures and have those notes or pictures instantly digitized and archived by simply docking the Logitech io2 Digital Pen. MyScript Notes for the Logitech io Pen can convert handwritten notes into text, while also fine-tuning shapes, tables and charts. To increase handwriting recognition accuracy, MyScript Notes includes a training module to familiarize the software with the user’s own handwriting. In the Logitech io2 software, archived documents are searchable by any handwritten word. Information can then easily be imported into calendar applications such as Microsoft Outlook or Lotus Notes. Or, with one click, people can email digital files to a colleague.

The digital paper used with Logitech’s Digital Writing System is now available in a variety of forms. The retail version of the Logitech io2 Digital Writing System comes with an 8.5-inch-by-11-inch notebook, an 8.5-inch-by-11-inch notepad and a smaller travel notepad, with additional offerings available online. The digital paper enables the capture of handwritten notes through a patented pattern of tiny dots pre-printed on each sheet to form a light screen effect. This pattern is read by an optical sensor embedded in the Logitech io Digital Pen, which then stores the information in non-volatile memory until the pen is docked in its USB cradle.

Logitech has also introduced ioDirect, a new service that gives customers instant access to all the paper and accessories available for the Logitech io2 Digital Pen. Logitech’s ioDirect will update registered users on the latest news, accessories and software, as well as enable them to set up a standing order of their frequently used paper.

The Logitech io2 Digital Writing System will be available beginning in late September through retailers in the United States, Germany and the United Kingdom, as well as on www.logitechio.com. The suggested retail price in the U.S. is $199.95. Digital paper prices start at U.S. $3.99.